Dive into the culture of the Black Sea

Dive into the culture of the Black Sea 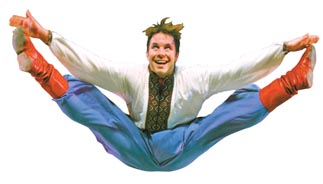 The Ukrainian National Folk Dance Ensemble Named After P. Virsky perofrms at the Black Sea Cultural Festival, which runs to Sunday. Provided by the Ministry of Foreign Affairs and Trade

The Black Sea Cultural Festival, the fifth festival hosted by the Ministry of Foreign Affairs and Trade as a part of its cultural exchange program, will feature performances, exhibitions and activities by groups from the Black Sea countries of Bulgaria, Ukraine, Georgia, Romania and Turkey. Events will be held from Thursday to Sunday at the National Theater of Korea’s Small Hall “Dal.”

Since 2007, the ministry has sponsored a cultural exchange program designed to promote understanding of foreign cultures in Korea while also sharing Korean culture with countries overseas. The program often includes performances, exhibitions and lectures.

“For the past 30 to 40 years, our government focused only on sharing Korean culture,” Jo Dae-sik, the foreign ministry’s director general of cultural affairs, said at a press conference on July 20. “To achieve the true meaning of mutual cultural interaction, we have tried to plan more events to bring global cultures into the Korean cultural landscape.” 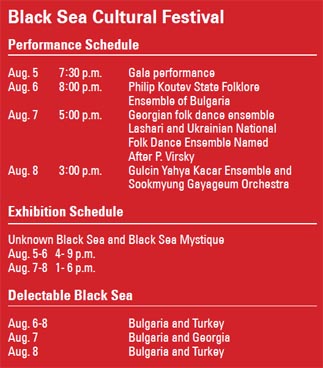 This year’s festival opens with a gala performance by companies from four countries: the Philip Koutev State Folklore Ensemble of Bulgaria, the Ukrainian National Folk Dance Ensemble Named After P. Virsky, the Georgian folk dance ensemble Lashari and the Gulcin Yahya Kacar Ensemble from Turkey. These companies have all performed extensively within their own countries and internationally. During the festival, each company will also present individual performances.

A performance group from Romania was also scheduled to appear, but had to cancel because of administrative problems.

However, visitors can still learn about the culture of Romania, and all of the Black Sea countries, at exhibition booths set up in the theater lobby.

The Unknown Black Sea exhibit provides geographical information about the participating countries. In the Black Sea Mystique exhibit, visitors can learn more about what made each country famous: Bulgaria is renowned for its yogurt; Romania is the home of Dracula; Turkey is the country where east meets west; and Ukraine is the center of Eastern European architecture. 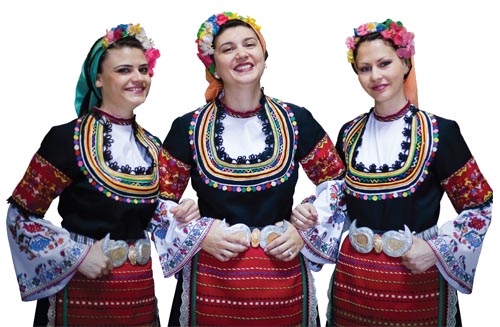 Members of the Philip Koutev National Folklore Ensemble from Bulgaria


Traditional garments, books and movies will also be displayed.

“Surprisingly, when you ask the person next to you if he or she can tell you the location of the Black Sea, most of the time you will hear ‘I don’t know’ as an answer,” said Cho Jai-chel, the director of the foreign ministry’s culture and arts division.

The section called Delectable Black Sea offers visitors a chance to taste the foods of each country, including Bulgarian yogurt, Georgian wine and Turkish coffee and baklava.

On the last day of the festival, the Sookmyung Gayageum Orchestra and Turkey’s Gulcin Yahya Kacar Ensemble will appear on the same program to highlight similarities between the music of the two cultures. Each group will perform well-known folk songs from their country.

Starting next year, the ministry plans to organize its event around a single theme, rather than around a country or region.

“I think we’ve covered almost all the regions in the international community,” Cho Jai-chel said. “We haven’t decided on the theme for next year, but I think flute music would be fun, since most countries have a musical instrument similar to the flute. We could have many wind instrument players here in Korea, allowing Koreans to experience all of this music in one place.”

The festival continues through Sunday at the National Theater of Korea’s Small Hall “Dal.” All programs and food tasting events are free and open to the public, with the exception of a Bulgarian pork dish prepared as part of the Delectable Black Sea event. Go to Dongguk University Station, line No. 3, exit 2. For more information about the festival, call (02) 326-1185 or visit www.blackseafestival.com.