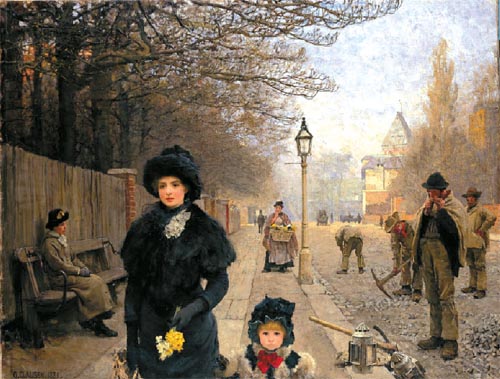 “Spring Morning, Haverstock Hill” (1881) by George Clausen (1852-1944) is part of the exhibit “From Turner to Impressionists: The Collection of British Landscape Paintings.” Provided by Bury Art Gallery


Descriptions of the moors in the works of the Bronte sisters and the pastoral scenes shown in films based on Jane Austen’s novels have lured many a traveler to the British countryside.

Images such as these are now being shown as part of a new large-scale exhibition of 19th-century British landscape paintings in southern Seoul.

The exhibit, entitled “From Turner to Impressionists: The Collection of British Landscape Paintings,” is being held at the Hangaram Art Museum in southern Seoul until Sept. 26. It features more than 110 paintings from the Bury Art Gallery, University of Manchester, and six other British institutes.

A work by John Constable (1776-1837), one of the most famous British painters, welcomes viewers at the entrance. The painting, entitled “Branch Hill Pond, Hampstead,” depicts a countryside with a wide sky where quickly passing dark clouds tinged with sunlight pour rain on a pond in the distance.

“In Britain, the weather seldom stays the same for any prolonged period of time,” said Christopher Newall, the curator of the exhibition and an expert in 19th-century British art. “As the landscape and nature are vitally important to British sensibilities, the representation of the physical world in art is central to the artistic experience in our country.”

He added that landscape art developed into an important genre in Britain. One of the reasons was that the traditional system of art education employed on the continent, which tended to respect historical paintings while dismissing landscape paintings, was not firmly established in Britain.

Regrettably, this is the only painting by Constable in this exhibit for visitors to see.

The exhibit has five works by Turner, but they were painted relatively early in his career. Therefore, viewers expecting to see his unique brush strokes that exquisitely depict the trembling of air and light could be disappointed.

Still, the exhibition, which features about 80 painters, will be worth a look for anyone interested in British artists and the landscape art of the period.

The exhibit shows landscapes by famous Pre-Raphaelite Brotherhood artists such as John Everett Millais and by Victorian-era artists better known for their historical or symbolic paintings, such as Frederic Leighton and George Frederic Watts.

Pointing to the works, Newall said, “To these artists, the landscape was a more indulgent and private activity, undertaken as a means of diversion from the demands of the figurative subject or portraiture.”