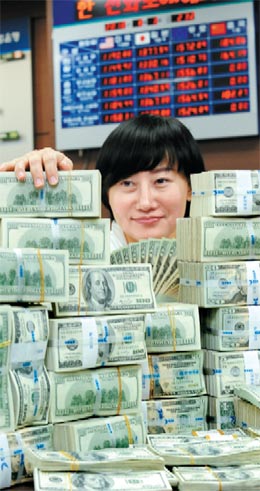 Korea’s foreign reserve holdings rose to a record high in July to $286 billion, close to the $300 billion target that the government believes is adequate to guard against the effects of a potential global financial crisis.

The July figures represented a $11.74 billion increase from June, the Bank of Korea said. The previous high was $278.8 billion in April.

It was the fourth time that the foreign currency reserves had registered a record high since last November, which reflects the country’s economic recovery and a surge in exports thanks to the weakness of the Korean won.

“The larger foreign reserve holdings last month were largely due to profits from equity investments [by the Bank of Korea] as well as a stronger euro and British pound when they were converted into dollars,” said Mon Han-geun, a BOK official.

The central bank said the value of the euro and the pound appreciated by 6.6 percent and 5 percent last month, respectively, against the dollar last month amid signs of an economic recovery in Europe.

Nearly 86 percent of the central bank’s foreign reserves are invested in foreign-denominated securities, whose value rose to $245 billion last month from $237.1 billion in June, while funds placed in deposit accounts grew to $36.3 billion from $32.7 billion in June.

Last month’s foreign reserve gains were the highest since May 2009 and the third biggest ever. 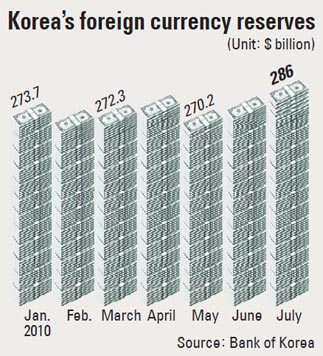 Kim Choong-soo, the central bank governor, has said that foreign reserves of $300 billion is the appropriate level to stabilize the foreign exchange market and provide a buffer in a possible financial crisis. The reserves can be used to defend the currency and provide liquidity in case of a sudden outflow of foreign capital.

Korea’s foreign reserves dropped to $200.5 billion in November 2008 at the height of the global financial crisis, but has since recovered.

Korea has the sixth largest foreign reserves in the world after China, Japan, Russia, Taiwan and India.

Korea has been promoting the idea of establishing “financial safety nets” that would provide temporary multilateral funding facilities to nations buffeted by global financial turmoil and a sudden withdrawal of foreign capital.

Korean officials, who want the issue to be discussed at the forthcoming G-20 Summit in Seoul in November, say the creation of financial safety nets would avoid the need for countries to build up large foreign reserves to protect themselves against the threat of an external financial crisis.

Meanwhile, analysts expect the Korean won to appreciate due to the growing trade surplus. However, a stronger won could depress exports in the months ahead, particularly if the Japanese yen weakens against the U.S. dollar. Japan is a main trading rival with Korea and its exports have been hurt by the strength of its currency.