Cartoonist draws his own success story

Cartoonist draws his own success story 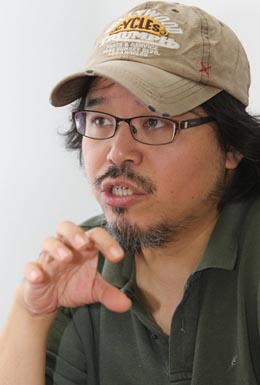 The Web cartoon “Moss” was so popular that more than 10 film production companies started competing for its film production rights just a month after it was first posted.

The cartoon ran for 10 months on Daum, one of the two major Web sites in Korea for Web cartoons, and during that time fans displayed a surprising amount of devotion to the cartoon and its creator Yoon Tae-ho.

By the time the movie was released, fans were so attached to the cartoon that many reported being disappointed with the film.

For many of them, the impeccable plot and feelings of suspense that were so integral to the cartoon were missing in the movie.

Even people who saw the film and liked it, but hadn’t read the cartoon, changed their minds once they’d had a chance to read the original.

Yoon, the man whose creation is the object of such devotion, is currently one of the most popular cartoon artists on the Web. Surprisingly, however, he is still new to the Web cartoon industry, even though he has been drawing cartoons for the past 20 years.

He said that making the transition from drawing on paper to drawing on his computer was a difficult one, but was something he felt compelled to do.

“Just a few years ago, many in the cartoon industry were worried that online content would make cartoons a thing of the past.

At the time, I was also worried that cartoons would become obsolete in the near future. 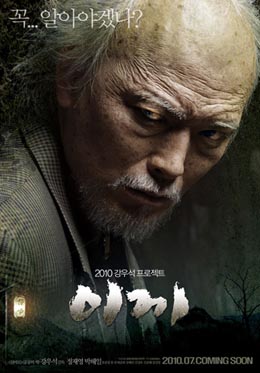 However, I was completely wrong,” Yoon said. “The Web presented a whole new opportunity for the cartoon industry, and I felt a sense of crisis that if I didn’t get outside of my comfort zone, I’d be left behind.”

Yoon was an apprentice for legendary cartoonist Huh Young-man and published his own cartoon for the first time in the early 1990s. He later published his work in newspapers and magazines.

As he was used to the format and style of drawing cartoons on paper, he had to put in extra effort to adjust to creating Web cartoons.

“The most difficult thing with Web cartoons was to capture the rhythm and speed at which viewers read the cartoons. The cartoonist can build suspense and control the flow of the plot more easily on paper, as readers have to flip pages over to get to the next part.

But on a screen, readers scroll down as they read cartoons and everyone scrolls down at a different speed,” Yoon said.

“A cartoonist has to take into account the speed at which readers scroll when determining how much space to devote to certain scenes. To figure out the best way to tell the story, I read my own cartoons on a computer screen several times over, scrolling down at different speeds. After a few experiments, I learned how I should divide the lines and how I should divide the spaces. My cartoonist friends Kang Pul and Kang Do-ha, who were already popular on the Internet, helped me a lot with this.”

Although the medium of his cartoons has changed, Yoon’s narrative style and storytelling ability still shine through.

Yoon said after he started posting his cartoons online, he began to receive more support from an ever wider group of people.

“I have even received many fan letters from middle-aged people,” he said. “There was one housewife who said my cartoon was the first cartoon she’d ever read in her life.”

Another benefit of posting cartoons on the Web, according to Yoon, is that there is no restriction on the material, unlike with magazines, where one has to cater to a specific audience.

“When publishing cartoons in magazines, you are limited to what the magazine’s readers will like,” he said. “But you can talk about anything in Web cartoons, because the Internet is open to readers from every background.”

However, there is one significant drawback to publishing on the Web. The writer’s fee is much less for Web cartoons than that for cartoons in magazines, Yoon said.

“Still, if we include the royalties from movies or TV dramas, it is possible to say that the market for cartoons is the biggest it has ever been,” he said.

Yoon also talked about his views on the future of cartoons.

“I think the concept of the ‘digital cartoon’ will overtake the Web cartoon in the near future,” he said.

“The digital cartoon includes Web cartoons and cartoons that can be viewed on either mobile phones or smartphones.

And when the iPad becomes ubiquitous, it will become a very useful medium for disseminating cartoons.”

Yoon pulled out his iPhone to show a cartoon he had downloaded from the United States. The screen filled up with a scene from the cartoon. When he ran his finger across the image, the next scene appeared.

“I think we could add a more complicated feature here, “ he said. “For example, we could add hyperlinks to the images and make them multilayered. It will make the experience of reading cartoons more interactive rather than just linear.”