It’s a boy for Sol and Song

It’s a boy for Sol and Song 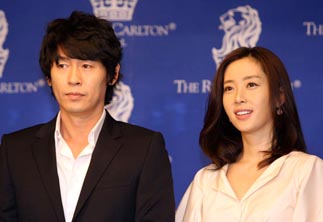 Sol Kyung-gu and Song Yoon-ah have announced the birth of their first child, a boy born Tuesday at a Gangnam area hospital.

“Both mother and baby are healthy,” the couples’ management company, S2007 Entertainment, said.

Sol and Song tied the knot last May. They had previously worked together on the films “Jail Breakers” (2002) and “Lost in Love” (2006). Sol is known for his roles in “Peppermint Candy,” “Public Enemy” and “Silmido.” Song is a film and TV actress who recently appeared in the film, “Wedding Dress.”