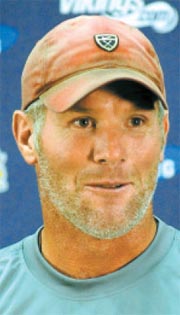 MANKATO, Minnesota - A Minnesota Vikings player said Tuesday that Brett Favre has texted his teammates and told them he plans to retire.

Tight end Visanthe Shiancoe said he learned of the messages by talking to several teammates, though he had not received any direct messages from Favre.

“He told a couple guys on our team he’s going to retire,’’ Shiancoe said after practice Tuesday evening. “He hasn’t told me, but I’m going to check my phone.’’

Earlier Tuesday, a person with knowledge of the situation told The Associated Press that Favre has informed the Vikings he won’t return for a second season. The person said Favre called coach Brad Childress and texted some players and team officials to say his injured left ankle is not responding as well to surgery and rehabilitation as he had hoped. The person spoke on condition of anonymity because no official announcements were made.

Childress said Favre had not told him directly that he plans to retire as of Tuesday morning. The coach would not confirm Favre’s status with the team, calling it a “fluid situation,’’ and he was unavailable for comment after the evening practice. Owner Zygi Wilf declined to comment.

“I’m not a big hearsay person,’’ Childress said. “I gotta hear it from the horse’s mouth.’’

As always with the 40-year-old star quarterback, things could change. Favre and his agent, Bus Cook, did not return messages from the AP.

“I plead the fifth on everything,’’ defensive end Jared Allen said. “I love Brett and he reserves the right to do what he wants to do. We obviously love him as a teammate. We’d like to have him back. But until it’s official, I’ll believe it when I see it.’’

True enough. With Favre, nothing ever seems final. He told the Vikings last year he wouldn’t play, but changed his mind and joined them immediately after they broke training camp.

Childress even drove to the airport to pick him up for his 19th NFL season. Camp this year ends on Aug. 12.

Star running back Adrian Peterson said he still hopes that Favre will be handing him the ball in the season opener on Sept. 6 in New Orleans. Peterson said he exchanged text messages with Favre on Tuesday but declined to give details.

“I’m still up in the air like you guys trying to figure out what’s going to happen,’’ Peterson said. “I’m sure he’ll make the best decision for him.’’

Every Minnesota player asked about Favre reacted with hesitation after three years of answering questions about Favre’s future.

“It’s always back and forth with Brett,’’ said quarterback Tarvaris Jackson, in line to get the starting job if Favre is gone.

“It’s his decision. He deserves the opportunity to decide when he’s going to retire or not, whether he wants to retire or not. It’s up to him. Right now, I’m just trying to focus on getting better.’’

Favre has considered retiring every summer since 2002. It led to an ugly parting with the Packers that got him traded from Green Bay to the Jets in 2008. After a so-so season in New York, he announced his retirement in early 2009 for the second time, then reconsidered and signed with the Vikings.

He had one of his best seasons last year, with career bests in completion percentage (68.4), quarterback rating (107.2) and fewest interceptions (7), while throwing for 33 TDs and 4,202 yards to lead the Vikings to an NFC North title.

He hurt his left ankle in the NFC championship loss to the New Orleans Saints and had arthroscopic surgery in May.

Favre was under contract for $13 million this season, but only if he plays.