In war, should we only rely on men?

In war, should we only rely on men? 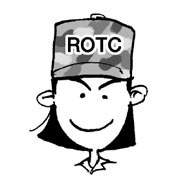 Colin Powell, a Gulf War hero, was the first African American appointed to the position of chairman of the Joint Chiefs of Staff and secretary of state of the United States. However, if it had not been for the Reserve Officers’ Training Corps system, he could have ended up being a geologist or a plain salaried worker at most.

Although he was interested in geology as a student at the City College of New York, he found it difficult to feel a sense of belonging. When he became a junior and joined the ROTC, his feelings changed. For the first time in his life, he was recognized as a member of an organization. Working as a student regimental commander, he honed his leadership skills and learned how to handle people and organizations. After being commissioned as an officer, he volunteered to participate in the Vietnam War.

In Korea, too, many former ROTC officers joined the Vietnam War. Popular actor Ahn Sung-ki was almost one of them. After entering the Vietnamese language department of the Hankuk University of Foreign Studies, he joined the ROTC to fight in Vietnam. However, the withdrawal from Vietnam started around the time he graduated from university. He had to give up his dream of participating in the war and served instead as an officer in an artillery unit. Now, he is busy filming “Song of String,” which is based on writer Kim Hoon’s novel of the same title. In the film, Ahn plays General Isabu from the Silla Dynasty (57 B.C.-935). If he manages to capture the ROTC spirit, I think he will play the role of a military general realistically.

There was once a golden age for retired ROTC officers. Big businesses recruited them as their first priority. As a result, one of every three Samsung Group CEOs and over 5,000 executives of listed companies are retired ROTC officers, owing to their reputation for leadership, responsibility and strong management skills.

They have three characteristics - a high regard for school, hometown and family. There is one thing they swear by - the junior-senior relationship. And there is just one thing they don’t have: women. Since its inception in 1961, the ROTC has been off-limits to women.

This restriction is about to be broken. The Ministry of Defense has reportedly decided to admit 60 female ROTC cadets on a trial base in the second half of this year. Still, some have criticized the decision. The slogan at the Sangmudae camp, where some ROTC cadets undergo their four months of training, is “follow me.” Critics doubt whether the female cadets truly can complete the training regimen, but in modern warfare, should we only rely on men? In a survey of 500 female college students conducted by GNP lawmaker Kim Ok-lee, 94 percent of respondents said they supported the ministry’s decision to open the ROTC to women, and some 36 percent of them said they were willing to volunteer to be cadets. I hope we soon have a female Colin Powell within our ranks.