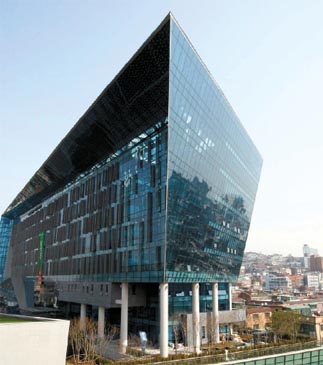 The grandiose Yongsan District Office in Seoul. By Byun Sun-goo

A bunch of new, luxurious government buildings are being criticized for being a waste of taxpayers’ money.

Yongsan District completed construction of a 159 billion won ($134 million), 15-floor district office last March. Behind its luxurious facade, however, the building is mostly empty, and most of the offices are locked. Those that are open reveal empty desks inside. Each floor has an unused meeting room, except on the 10th floor, where restaurant workers and office mates gather to eat snacks and chat.

“The building looks magnificent,” said Choi Mal-lae, a senior citizen living in Ichon-dong. “But when I came inside and saw all these empty spaces, I was enraged because it seems my tax money is being wasted.”

Lee Jong-nam, a director of the finance and economy department in Yongsan District, said, “We created a task force to find efficient ways to use the building.”

Ongjin County is also being criticized. In 2006, the local government spent 35 billion won to build an extravagant county office with an auditorium, public fitness facility and health center. Only a handful of people use it because Ongjin County is made up of over 100 islands, and residents have to take boat trips to reach the office. The building is now being used as a kind of village center for people in Yonghyeon-dong, the surrounding neighborhood. Seongnam City Hall complex, which has been criticized for exorbitance, has separate meeting rooms for each department, but they’re only used once or twice a week. The building also has seven medium to large seminar rooms, which the government has opened up for citizen use because officials don’t need them. Size of the city hall is 74,309 square meters (about 800,000 square feet) for 750 civil servants - an average of 33.99 square meters per worker. The Ministry of Public Administration and Security said last month that it will implement a new law to prevent local governments from carrying out thoughtless construction projects.

Yongsan District, Ongjin County, Seongnam and other local government’s buildings that exceed the area limit in the law will have to rent out empty spaces within a year.

The government buildings are also too hot because most of the fancy new structures are clad in glass. The Office of the Prime Minister recently issued an order to reduce energy use in government buildings by 10 percent compared to the last two years, so air-conditioner use has been curtailed.

The temperature in Daeyeon-dong, where Busan’s Nam District Office is located, reached 30 degrees Celsius last Thursday. “Employees who don’t sit next to windows suffer greatly and visitors file lots of complaints,” said Kim Chang-su, the official in charge of management of the office, “But there is no way to solve this problem.”

Gwanak District Office in Seoul has a bad ventilation system because it has too few windows. Gwanak District spent 180 million won installing a solar-power generator and water heater to solve the problem, but employees are still complaining. Lee Yong-rae, an officer in charge of the building management, said, “There have been so many complaints from the employees that my head sinks down on my chest by the time I go home.”