A lyrical ode to the working class

A lyrical ode to the working class 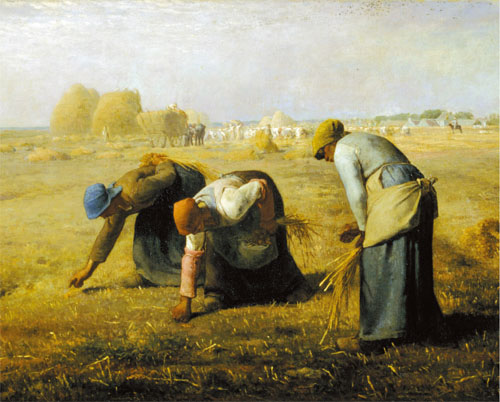 The image is so famous that we hardly give it a second glance. Reproductions of it hang on the walls of restaurants and cafes all over the world. In Korea, the picture, which invites associations with goodness and nutrition, can even be found on snack packages.

“The Gleaners” by the French artist Jean-Francois Millet (1814-1875) has been reproduced so often, in fact, that it is almost invisible. But did you know that the painting, which seems innocuous by today’s standards, was criticized for being incendiary when it was released in 1857?

This was, in part, because the bourgeois critics of Millet’s time did not consider the working class to be suitable subjects for works of art.

The painting shows three women collecting grain from a barren field. It captures the humble beauty of the women’s work as well as the artist’s affection and respect for the people of the lower class - a fact that was only appreciated long after Millet had passed away.

Since ancient times, it has been poor people in the lowest classes who have gleaned the fields after a harvest. These people, who had no farmland of their own, had no choice but to stanch their hunger with leftovers from someone else’s farm. Most farm owners saw gleaning as a form of charity and there was an unspoken social contract by which they would leave the remains of the harvest for the poor to collect.

The three women in Millet’s The Gleaners must have been poor people who worked as day laborers, moving from farm to farm. Their faces and hands are tanned dark red and are rough from doing so much hard work under the sun. In particular, the woman on the far left seems to have some trouble with her lower back, as she is resting the hand that holds the stalks of grain on her back.

However, the women in the painting are not depicted as servile. They are calmly laboring for themselves and their families, and they have a quiet sense of dignity. In this sense, the painting differs from the genre paintings of the 17th-century, which depicted farmers as vulgar and ridiculous. It also differs from the idyllic paintings of the 18th century, which show images of happy farmers in beautified conditions. That distinction is why Millet is considered a realist artist.

At the time, however, Millet’s realistic depiction of the women in The Gleaners made his bourgeois critics uncomfortable because it served as a reminder of the socioeconomic disparity that prevailed in France at the time.

What made the critics uneasy was the scene being played out behind the women. There, the harvested grain is piled up and workers busily carry bundles of grain back and forth as the landlord supervises the situation from atop his horse.

Millet’s critics thought that the dramatic contrast between the two scenes was designed as propaganda to call attention to the gap between rich and poor and incite the working class to revolution.

But Millet, as he himself admitted, was not a political person. He simply wanted to show the hard life of the farmers, which he had experienced directly, albeit with a gentle lyricism and a kind of religious piety rather than with feelings of anger or deprivation. Perhaps that is why we feel only poetic beauty and peace when we look at it today. Perhaps that is also why Millet is sometimes also called a Romantic artist. 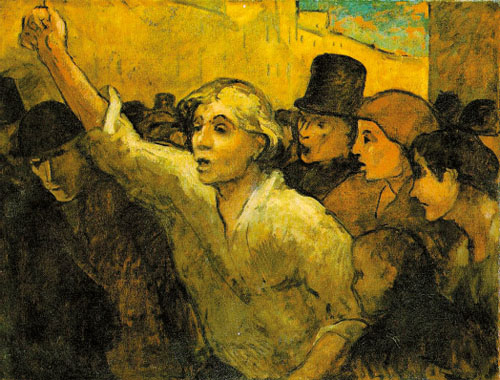 However, many bourgeois critics of the time reacted negatively to the painting and assumed that Millet was a socialist, maybe because they were still reeling from the shock of the February Revolution that occurred a decade before the painting was released. The revolution had been led by the working class, which had continued its protests into the time the painting was created.

Millet was not the only realist of his time, and there were others who were much more political. One of these was Honore Daumier (1808-1879). Daumier started his career as a caricaturist, so his work had a natural political bent. Over his lifetime, he produced more than 4,000 satirical lithographs, which are similar to the editorial cartoons of our day. Many of the images are witty, even to our modern sensibility. His works targeted a broad swath of the population, including greedy politicians. For example, one image depicts a petit-bourgeois man seeking access to an expensive restaurant. Another shows a bourgeois woman whose skirt is so broad that it knocks her escort over.

Daumier’s favorite subject in the 1830s was Louis-Philippe, the king of France. Louis-Philippe was a constitutional monarch who ascended to the throne following the July Revolution of 1830, which was led by the bourgeoisie. Although he came to the throne shouldering the high expectations of the people, he failed to resolve the mounting conflicts between the bourgeoisie and the working class, and between conservatives and progressives - a situation that was exacerbated by France’s poor economic conditions. Wages declined amid the economic slump and members of the working class continued to protest, demanding higher wages and voting rights. And the more the people protested, the more conservative the king became.

It is said that Louis-Philippe took many of these satirical images of him in stride in his early days on the throne. He even created liberal policies on the press, as he himself had come to power through a revolution. But there was one image that even he couldn’t stomach.

In a satirical lithograph from 1832, Daumier depicted Louis-Philippe as Gargantua, a giant king in a classic novel who fills his stomach with food squeezed out from the petit-bourgeoisie and the working class.

The joke was lost on the king, who may possibly have worried that the painting was poking fun at his weight, and Daumier was imprisoned for six months.

Undaunted, Daumier continued to paint after his release.

Whether it was poetic justice or coincidence, Louis-Philippe was later ousted in a revolution in February 1848 and he fled to Britain.

This resulted in France giving the entire population, even the working class, the right to vote. (But it took another 100 years for “universal” suffrage to apply to women.) 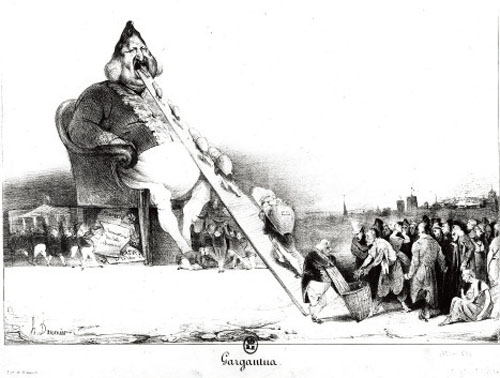 ‘Gargantua,’ a caricature of the French monarch Louis-Philippe, by Honore Daumier. Lithograph

Of course, Daumier rejoiced at the revolution. His painting commemorating the event, entitled “Uprising,” was painted around 1860 and puts the working class squarely at the center of the revolution.

That is in stark contrast to “Liberty Leading the People,” by the French Romantic artist Eugene Delacroix, which depicts the July Revolution of 1830. In that painting, the center of attention is a young man from the bourgeoisie.

In Daumier’s Uprising, the man in the white shirt lifting his fist does not look violent or belligerent. Rather, he seems desperate in his appeal for a solution to the hardships that he and his comrades have suffered. This shows the artist’s deep affection for the people of the working class.

Many artists, writers and intellectuals of the time became concerned about the working class - especially as knowledge of their role in the nation’s economy increased, even as the conditions in which they worked deteriorated.

I will write about the economists who discussed labor conditions and socialism and other artists who faithfully depicted the lives of people from the working class in my next article.