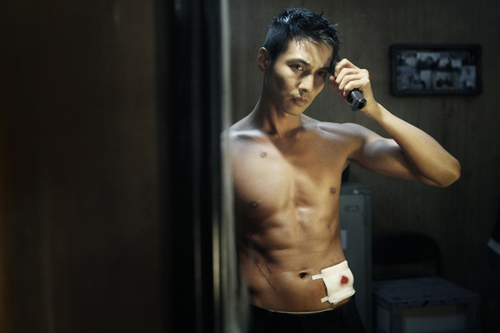 Tae-sik (Won Bin) resolves to save the neighbor girl who is his only connection to the world in the film ‘Ajeossi’ (‘The Man from Nowhere’). Provided by CJ Entertainment

Good actors are able to blur the line between themselves and their characters in order to make the audience believe they have become a different person.

Rarely is a pop culture icon able to achieve this level of artistry, but that’s exactly what Won Bin does in his latest movie, “Ajeossi” (“The Man from Nowhere”).

That’s not to say Won hasn’t gotten good reviews for his work. He received mostly rave reviews for his role as the developmentally disabled son in the award-winning film, “Mother” (2009).

His counterpart Kim Hye-ja, however, the veteran actress with a 30-year career who played the title character, outshined him.

Even after his success in Mother, Won was less a serious actor than an entertainer whose ability to attract attention was largely a result of his surrealistically perfect looks.

Needless to say, doubts persisted whether the plot of Ajeossi would be able to keep the audience intrigued for the nearly two-hour running time, and whether Won would turn in another passable yet passion-less performance.

After seeing Ajeossi, however, there is no doubt that Won is more than just a pretty face. He has proven himself an actor who can express a range of different emotions.

In the film, Won plays Tae-sik, a former special agent who isolates himself from the world by locking himself up in his dark and run-down pawn shop. His only connection with the outside world is through a little girl named So-mi (Kim Sae-ron), who lives next door.

Tae-sik is a man of few words, and although he seems to be indifferent to the little girl, whose mother works as a nightclub dancer and is not a very attentive parent, he looks after her.

Tae-sik is forced back into the world when So-mi and her mother are kidnapped by members of a drug-trafficking ring for which her mother has been working on the side.

The film draws the viewer in by showing us why Tae-sik risks his life to save the little girl. After the death of his wife and unborn child, Tae-sik feels he has nothing left to lose. He even says in one scene that he “only thinks of today, not tomorrow,” which allows him to act so ruthlessly when killing the people who stand between him and So-mi.

However, Won’s meaty performance is what carries this compelling story. Whenever the camera zooms in on Won’s eyes, his grief, sadness and feelings of loss are as acutely felt as if they were our own.

The film also has some great action scenes that provide relief from the intensity of the more emotional moments. These are not the typically gratuitous action scenes found in Hollywood blockbusters; rather they are marked by their compactness, which is simple yet intense.

Director Lee Jeong-bum once said he had tried to avoid cliched action scenes, such as those in which the good guy and bad guy exchange blows while the other villains wait their turn to punch the hero.

Although the film touches upon disturbing topics such as drugs and child trafficking, while including a fair share of violence, the film is not always serious. There are enough lighthearted moments here to give us time to pause in the midst of all the fast-paced action.

But the biggest virtue of the film is its focus on Tae-sik’s transformation and the emotional catharsis he experiences when he finally lets go of all of his repressed feelings. That approach wouldn’t have worked as well without Won, who pulls us along with him every step of the way.

“Ajeossi” (“The Man from Nowhere”)