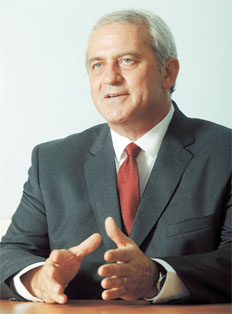 Today the JoongAng Daily kicks off a new education series, providing an in-depth look at international schools in Korea, from administration to admission. Covering international and foreign schools in the country, including those already operating and those just breaking ground, the series will delve into what makes each school special.

Nestled in green on the side of a mountain in Bundang, Gyeonggi, the Korea International School caters to students in kindergarten to the 12th grade from families around the world.

“I feel it’s the go-to place for academics,” said Stephen Cathers in an interview with the JoongAng Daily. “It has a special niche, and the school’s excellence is well-known.”

The 57,727-square-meter (621,370 square feet) campus boasts a 100 percent university acceptance rate for its graduates in the last four years, with 56 percent of the students being accepted among the top 40 U.S. universities as ranked by U.S. News and World Report magazine, according to the school.

The school is off to a fresh start this September with Cathers, who will be starting his first year as new KIS school director. With a M.S. in educational leadership from Portland State University, he taught in Alaska for 23 years. He was then an assistant professor of education at George Fox University in Oregon before joining KIS.

“I got a little tired of not being around kids and being in the trenches,” said Cathers, voicing his enthusiasm for his new position. “I had a strong desire to change people’s lives, and in education you can see the changes.”

It wasn’t easy, personally, for Cathers to take the plunge, but he saw it as his last chance to teach at an international school.

“[International schools] see the benefits of democracy and are more progressive. When I heard about the position, I said to my wife, ‘If we don’t do it now, we’ll never be able to do it,’” said Cathers. His first trip to South Korea and KIS was in 2009, when he said he was moved by the school and the helpful people.

“I feel that KIS will be recognized in the future by people. The school has been on the right track for several years now,” the director said. “The school provides a broad education for students now in this century.”

“I was in the student council, theater production, jazz band and the rock band,” Cho said. The students are encouraged to “throw [themselves] into the activities which you really enjoy,” according to Cho.

After living abroad, Cho arrived in Korea and at KIS with three months left in his sophomore year of high school. What would have been a terrifying experience to most high school transfer students ended up being a smashing success for Cho, who landed a spot on the student council as vice president and later was elected class president.

“The environment in which the students perform and the opportunities the school provides helped me assume that position,” said Cho.

KIS has everything from a yoga club to a “global cooling club,” dedicated to discovering ways to alleviate the effects of global warming.

The school also has a recreation room, rock climbing facilities, a mountain jogging trail adjacent to the campus and even a greenhouse.

Parents who may be afraid their children will neglect their studies needn’t worry, because students who let their grades drop have their participation in extracurricular activities restricted.

It takes a 3.0 grade point average to participate in the activities, and KIS has a “challenging curriculum where students deserve what they get,” said Cho. “It’s up to the students to balance it out. You won’t see everyone over-playing.”

Sherman Taylor, an admissions officer, echoed Cho’s assessment of the school’s academic standards. “All our classes start from honors to Advanced Placement,” he said.

All classes are conducted in English, and to gain admission to the school, there is a rigorous admissions exam that tests students on reading comprehension, language arts and mathematics. Students enrolled in grades three to nine are also tested every year in these subjects to assess their progress.

“We tell parents, ‘You can’t study for the exam,’” said Taylor. “If students are lacking in something, I recommend other schools and tell them to come back in six months or a year for reassessment, because other schools have good programs that could help the students.”

To help put parents at ease, Taylor said he personally meets every parent that visits the school.

“Everybody, even before testing, the parents and the students have to be happy,” Taylor said. Expat parents are also provided with a USB drive containing information on “how to survive life in Korea.” To accommodate parents during their stay in Korea, the admissions officer advises them not only on their children’s education but also on housing and basic tips regarding the country where he himself has lived for 13 years.

The school looks for learning potential in the lower grades and for people who enjoy learning among older students.

Starting in high school, the focus on grades intensifies, but “if they bring something to the school and are interested in other things, then we’ll look at that, too, apart from their academics,” according to Taylor.

KIS provides scholarships for students from grades nine to 12, with three per grade level receiving $5,000 that can be used either at KIS or for college tuition later.

What also sets KIS apart from other schools is that the school is “not competitive within itself,” said Taylor. “There is no competitive edge here. All the students from kindergarten go through a character education program where they learn about cooperation.”

Cathers added, “All of us are challenged with what we do in our lives. This is the best place in the world to experience everything.”

KIS opened in August 2000 to several hundred students from kindergarten through grade six. It has since added a high school division and, starting Wednesday, will also teach preschool students.