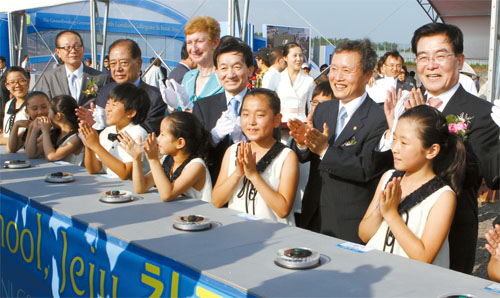 The North London Collegiate School on Jeju Island is scheduled to open in September 2011 on 104,385 square meters (1.1 million square feet) of land in southern Jeju, with state-of-the-art facilities including dormitories and an indoor swimming pool. Tuition will cost 27 million won ($23,000) per year, and guidelines for school admission will be available in November.

“It is thrilling for me to be helping the school now to become international and to take its place on the world stage,” Helen Stone, chair of the NLCS board of directors, said in a congratulatory speech. “NLCS Jeju also will educate and equip its pupils to make very exciting career choices, and with their English-speaking education they will be truly international citizens.”

The school will offer academic programs from fifth grade to thirteenth grade. In its first year it plans to recruit 568 students from grade five to grade 11, but its ultimate goal is to recruit a total of 1,388.

The NLCS is the first achievement of the Jeju Global Education City project, initiated by the JDC in 2006. The $1.78 billion plan aims to transform Jeju into an international education hub by convincing 12 prominent schools to open campuses in Jeju to accommodate a total of 9,000 students from Korea and the Asian region by 2015. Canadian school Branksome Hall will open a campus here in 2012.

“We came to explore the island and found the most beautiful and perfect place to deliver a English-speaking education. It’s a very lovely environment for our first venture overseas,” Stone said at the press conference. When asked about the benefits that distinguished NLCS from other international schools in Korea, Stone said it would provide an exchange program to enable select Jeju students to study at its British campus.

Though the atmosphere was festive on Wednesday, Jeju residents’ reactions to the Jeju Global Education City project have been mixed.

Kim Hee-ok, a local woman in her 70s, thought the school was a good deal. “I have two grandchildren. One is in kindergarten and the other is a third grader in elementary school,” she said. “Though they’re too young to apply to NLCS, I came to see the ceremony because I thought I could get a little picture of what this school will look like. While some say its tuition is expensive, I think it’s reasonable because it would cost me more to send my grandchildren to the United Kingdom or United States.”

However, Kim’s friend said some Jeju residents feel animosity toward the international schools. “Such feelings won’t go away unless the schools are willing to provide scholarships to enable children from low-income families to study there,” she said.

Stone addressed exactly those concerns, saying, “We’re very keen on diversity and we want to help as many people as possible who are gifted and talented. I hope there will be scholarships in the future.”

JDC head Byon said that though no specifics have been decided on scholarships for low-income children, he did foresee NLCS using its profit to improve the school and help diversify the student population.