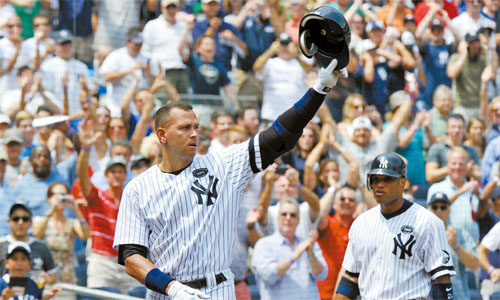 NEW YORK — Alex Rodriguez hit
his 600th career home run on Wednesday,
becoming the seventh player in
Major League Baseball to achieve the
feat and sparking new debate about
his place among the game’s greats after
his admission that he has used performance-
enhancing drugs.
The New York Yankees third baseman
reached the milestone when he
sent a two-run homer off Toronto Blue
Jays pitcher Shaun Marcum over the
center field wall in the first inning at
Yankee Stadium. Rodriguez raised a
hand as he rounded first base and was
congratulated by teammates. Moments
later he stepped out of the Yankees
dugout to tip his hat for the applauding
crowd.
“It was a special day,” he told reporters.
“I’ve been through a lot the
last two years. I know a lot of fans are
going to have their hesitations on what
it means. But for me personally, I’ve
played a long time and it is a big number
and a special number and I feel
very good about it.”
It was just the 17th home run this
season for Rodriguez — below his
typical total — and came exactly three
years to the day after his 500th. But it
was enough for him to join an exclusive
club of baseball’s greatest batters.
At 35, Rodriguez became the youngest
player to reach 600. The previous record
was held by Babe Ruth, who was
more than a year older but played in
fewer games.
If Rodriguez can continue piling
up home runs, he could finish at the
top of the list, currently occupied by
Barry Bonds with 762. Hank Aaron is
second with 755 followed by Ruth
(714), Willie Mays (660), Ken Griffey
Jr. (630) and Sammy Sosa (609).
Rodriguez, however, is the only active
player to have hit 600 home runs,
and he still has seven years remaining
on his $275 million contract with the
Yankees.
“I don’t know where he’s going to
end up,” Yankees manager Joe Girardi
said. “So much of it depends on health
as we move forward. But there’s still
power there — he showed that power
going to dead center.
“As long as he’s productive and
having fun and enjoying the game, I’m
happy for him.”
The homer was Rodriguez’s 255th
since he joined the Yankees in 2004
after starting his career with the Seattle
Mariners in 1994 and moving on to the
Texas Rangers as a free agent.
“Congratulations to Alex on this
great achievement and on adding another
highlight to Yankees history,”
Yankees managing general partner Hal
Steinbrenner said in a statement.
“We are especially proud he accomplished
this feat as a Yankee and
here before the most loyal fans in baseball.”
Rodriguez had hit his 599th
home run almost two weeks ago but
needed 51 trips to the plate to get his
600th as questions about his form
started to pop up.
But he ended all the speculation
with one sweetly struck shot that landed
in Monument Park and evaded the
packed crowd that had hoped to collect
one of the specially marked balls that
were given to the pitchers every time
he batted.
“I was probably just trying to do a
little bit too much,” Rodriguez said. “I
had a lot of support from my teammates
— they were very patient. The
fans here in New York were extremely
patient.
“It reminds me of the place I’ve
been the last two years — talk little
and try to do the talking with my bat.
And the last week and a half or so, I’ve
been doing the exact opposite. I’ve
been talking a lot with the media and
doing very little with the bat. So I’m
glad that’s over.”
Despite his achievements, Rodri-