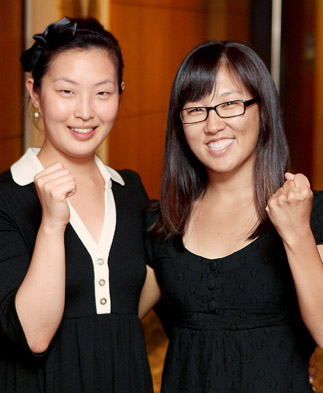 As more than 500 adoptees gathered at a conference in Seoul, two women introduced their social enterprise, which was created to bring adoptees, unwed mothers and their children together.

The organization, called Little J Family, gave their first public presentation at the Lotte Hotel in Sogong, Seoul, to attendees of the conference, the International Korean Adoptee Associations Gathering 2010.

The co-founders of the enterprise are Jang Ji-young, 28, and Shin Joo Ae, 27. The organization was formed when Jang decided last November that she wanted to be a role model for struggling single mothers like herself.

Jang had decided to break off her engagement during her second month of pregnancy.

“I thought I would not be happy living with such an irresponsible man,” said Jang.

She had even quit her job as a Web designer to follow her boyfriend, who worked in Japan. Jang said the boyfriend had drinking problems.

Deciding to have a baby by herself was not an easy decision. Jang convinced her parents that she could raise the child on her own, and she was surprised when her father agreed with her by saying, “every life is precious.”

The path of being a single mother in Korea, however, was tougher than she thought. One time, her boyfriend’s parents came to her and urged her to have an abortion. She could not find help anywhere, until she met Shin at a single mother’s community on the Internet.

Shin was adopted by American parents when she was 5 months old. After graduating from college, she returned to Korea in 2006. She began working as an English teacher, and searched for her mother.

Luckily, her documents were well preserved; she was able to find her mother after only one week.

When they met, Shin’s mother said that she had tried to raise her for three and a half months, but that adoption was the best decision she could make at the time.

After the two met, Shin became involved with a group of single mothers, which is how she met Jang. The two women quickly became close.

The enterprise has participated in three fund-raising events, earning 1 million won ($857,000).“We are still in the beginning phase, but we plan to have concerts, exhibits and English tutoring by adoptees,” said Shin.

The two also plan to help provide jobs for single mothers facing economic difficulty. The name of the enterprise comes from a combination the names Ji-young, Joo Ae and the initial of Jang’s son’s name.