Navigating the sea of smartphone apps

Navigating the sea of smartphone apps 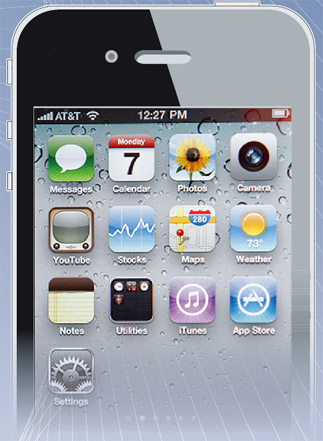 Apps are represented by rounded rectangular icons on the iPhone. With a tap, users can transform their smartphones into translators, game consoles, navigators, cameras and much more.

In simpler times, before smartphones became ever-present, commenting on the weather was a perfectly normal way to strike up a conversation. But these days, it seems that those inducted into the mobile cult have a new verbal handshake: “Have you tried this new app?”

With the number of smartphone users here surging, it seems everyone has an opinion on the best and worst applications for these amazing new devices.

At first glance, the sheer variety of smartphone apps is stunning.

“When the iPhone launched in Korea last year, I was terribly skeptical of its real practicality and about whether one really needed a smartphone. I thought it was just a gadget for show-off Apple otaku,” said Jeong Wu-yeong, a feature writer for GQ Korea, using a Japanese term for an obsessed nerd.

But now, Jeong is a proud convert. Citing a handful of apps that he says he uses daily on his iPhone, including some for quick article translations, storage and games, he says that his phone has made his life much easier.

In the two months after the iPhone 3G’s launch in Korea last year, KT and industry estimates showed that the number of Korean-made apps for the device had grown from around 100 at the end of November (when the iPhone debuted) to over 3,000 applications by January this year. By the end of May, this number had doubled to around 6,000, according to Dreamwiz, an iPhone application developer.

Applications for phones with the Google-developed Android operating system are also expected to gain ground here, after SK Telecom announced early this week that it had signed a carrier billing agreement for the company’s Android market, making it possible for users to pay for apps they purchase directly on their mobile phones. As of the end of July, a total of 70,000 mobile applications were available on the Android market for Korean users, according to SKT.

Recognizing the importance of this mobile software, LG Electronics, which has been suffering a steep decline in sales in their mobile phone division, recently launched the Optimus Q, which includes 100 apps that the company has pre-selected as Korean-friendly, already installed on the phones upon purchase.

For many local smartphone users, apps have changed how they live their daily lives, from being able to store work-related files on their phones to getting the latest cooking advice from the world’s top chefs. Below are a few favorite applications mentioned by smartphone users in Korea of various ages and professions.

VNC (Virtual Network Computing) Viewer($9.99)
This app affords the user control of a computer via his or her mobile device, connecting it to any Mac OS, Windows or Linux system. Lee Gang-ho, a department head at book design company TwoPP, says that with the VNC Viewer he no longer worries about having an Internet connection on business trips. “Whether I am off on vacation or out of the office, I can control my PC or Macintosh with this app. It’s as if I have my entire office in my hands through my iPhone,” he said.

Timeline of Korean History (Free)
Song Hee-kwon, a sophomore at Hyundai High School who wants to major in history in college, says that the Timeline of Korean History app is a handy way to memorize important historical events while on the move. Users can look up important historical events in Korea by typing in a certain date or name. “When I am studying for a history exam at school, I can just look up events through this app quickly, without flipping through books,” he said.

Adobe Photoshop (Free or $1.99)
This Photoshop app, available on iPhones and Android phones, helps users resize, restructure and optimize graphics on a mobile device. “I quickly mess around with designs and pictures I have taken to come up with new ideas on my smartphone through this app,” said SY Lee, manager of the design department on the PR team at the Walkerhill Hotel.

Camcard (Free for the lite version, original is $9.99)
Businessman Lee Sang-won is constantly receiving other people’s business cards, and his organizing skills can’t keep up with them. These days, things have become more convenient. “I just take a picture of the business card on my phone, bring up this app, and it stores the information on the card and organizes it for me in different languages!” he said.

KaKaoTalk (Free)
This Korean-language social networking app has become one of the “it” messenger services among iPhone users, allowing one-on-one chats or group chats. “Without paying a single won, I can use this app to text my friends who are also iPhone users,” said Lee Bo-ra, a secretary at the Asia Foundation.

Wingbus Seoul Restaurant (Free)
When chef Youm Young-il of Myoungwol-gwan restaurant wants fast restaurant recommendations in Seoul, he relies on the Wingbus Seoul Restaurant app to guide him. “This app helps me find popular restaurants, from which I get ideas and inspiration from for my own cooking,” he said. Users can browse by clicking on a respective area and type of cuisine, and get reviews, maps, addresses and phone numbers for the restaurants.

Whatsapp ($0.99)
This multi-language messenger and text service app for iPhones and BlackBerry phones has become popular among local smartphone users. With a Wi-Fi connection, any message, in text, picture or voice, can be sent to another iPhone or BlackBerry user anywhere in the world, for free.
“I use this app to communicate with my friends overseas for free,” said Sarah Kim, a student in Seoul.

Pocket Organ C3B3 ($2.99)
Musician Elena Jung says that this app, which simulates the sound of a Hammond organ, allows her to play a mini-synthesizer version of one of her favorite instruments. “The app is surprisingly precise in sound, varying from draw bar and rotary effect to harmonic percussion sounds,” she said.

For Cha Gyeong-mo, a financial sector worker, this app, whose name means “Girlfriend” in Korean, is the closest thing he has to a partner these days. Users can create a virtual girlfriend and either control her or be controlled by her. “The virtual girlfriend even tells me to quit smoking!” says Cha.

Ambiance ($2.99)
Interface designer and illustrator Namggoong U says that he often wakes up to the relaxing sounds of the Ambience app, including wind chimes, beach sounds and soft rain. The self-proclaimed “environment enhancer” app features various sounds for users to stimulate a certain mood. “Whenever I take a break from my design work, I turn on Ambiance and try to relax for a bit,” he said.

Soundhound ($4.99)
Soundhound, which identifies the title and artist of a song with a simple tap, has become a favorite among locals and has stayed among the top apps on the charts for weeks here. “It’s a great conversation piece when I’m out with friends in a bar or club. I was surprised that the system even identifies some Korean songs,” said Lee Eun-jin, 29, a grad student living in Seoul.

Bloomberg Mobile(Free)
English teacher Ryan Park says that he frequently uses the Bloomberg Mobile app to look up stock quotes. “It’s no nonsense with minimal graphics, meaning quick to load, and can also view up-to-date news stories. Also, many other stock apps won’t display Korean stocks, but this one does,” said Park.

Book& Dic series (Free or $1.99)
“The Book&Dic series is one of the most well-made apps out there, providing a diverse selection of book-related content including famous quotes, famous speeches, including those by Barack Obama, and classic literary texts,” said Tristan Song, a communications manager at a telecom company. He says that he gets daily English lessons from the app as well, by reading famous speeches in English and getting footnotes in Korean.

Daily Mass (Free)
Film and television actress Oh San-ha, a devoted Catholic, says she gets her daily dose of spirituality through the Daily Mass app. The app gives detailed information on the history and tradition of Mass and features prayers, biblical text and hymn lyrics.
Dropbox (Free)
GQ Korea’s tech writer Jeong Wu-yeong describes the dropbox app as “the simplest mobile storage unit for people who are constantly in and out of the office.” This simple file sharing service allows users to sync files on and offline and share them with others. “If I store all my files on the dropbox app, I can access them almost everywhere with a smartphone,” he said.

Daum Maps (Free)
This location-based app is the Korean equivalent of Google Maps. This detailed map of Korea, operated by Daum, Korea’s No. 2 Web portal, features a satellite view of Korea and can be viewed through the iPhone or iPod touch. “This map is much more thorough compared to doing a simple search on Naver and even includes a roadview,” said Ahn Joo-young, a full-time housewife.