The ‘school’ is home

The ‘school’ is home 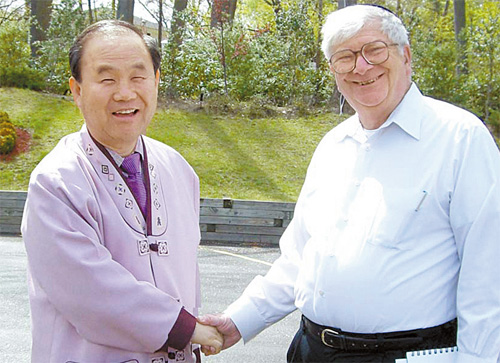 
Marvin Tokayer, a Rabbi ordained in New York in 1962, came to Korea for a symposium hosted by Shema Education Institute, which studies Jewish education methods, bearing a message on the importance of home education and on how Korean education system should be updated. The symposium was held yesterday at the 100th Anniversary of Korean Christianity Memorial Hall in Jongno in central Seoul.

Tokayer, who originally wanted to be a doctor, became cynical about life and turned to religion for an answer. This interest eventually made him dedicate his life to the study of religion, especially in relation to education.

After he was ordained, Tokayer went to Waseda University in Japan in 1970, where he first chose selections of the Talmud, with which the Asian audience can identify the most, and translated them into Japanese. Talmud, a collection of wise sayings that has been passed down by oral tradition, has not been translated into Korean and the version widely published in Korea is the translation of Tokayer’s Talmud written in Japanese.

Tokayer spoke with JoongAng Daily the day before the symposium and shared his views on education, which, he said, cannot be separated from the Talmud. During the discussion, he mostly relied on story-telling.

Q. What is the Talmud?

A. [Imagine that] you were to choose 25 of the most fascinating, intelligent and brilliant people that you know that the world recognizes and put them around this table and locked the door, and hid the tape recorder underneath the table and come back in 10 years. What would you find in that tape recorder? It will talk about the weather, their husbands, their wives, their children, life and death. They will talk about every aspect of life over 10 years. They will speak about everything. The Talmud is the minutes of great discussions which took place over 300 years with brilliant human beings who did not know that they are being remembered or recorded, and they talk about every aspect of life. Every aspect of life, you will find in the Talmud. The Talmud is not a book you read overnight. It is a lifetime study that you could never finish.

There is no page one. It starts at page 2 because everybody is in the middle. The last page is always empty. So everybody can add something new to the Talmud. So I’m here to remind you that Korea should also translate the Talmud into Korean and it should be part of your own literature and wisdom.

What’s the difference in education method between Koreans and Jews?

Let me give you an example. A child goes to school and comes home from school. What does the mother ask the child? ‘What did you learn today?’ A Jewish child goes to school, comes home from school, the mother asks, ‘What question did you ask today?’ When we study, we do not only study with teachers we study with ourselves. When we study only with teachers we have fear and tension. Maybe I’m afraid to ask the teacher a question when I don’t understand because the teacher would laugh at me, maybe the teacher would be disappointed. If we were to study the Talmud, we will study with ourselves and you would feel very relaxed. Since teachers are more experienced and professional, they can push child to the next level by giving them more insights the child cannot find in the book.

Would teachers be the one providing quality education?

Mom and dad should be the one educating the child. Parents review their child’s work because they are genuinely interested in the intellectual progress of a child. As long as parents are involved, the tension comes when studying breaks down. That’s why we don’t have tension and competitiveness among children. No one is perfect in everything. It is a parent’s job to find out what their child is most talented in. But, I see the tension happening in Korea. If that system ... is not established in Korea, a right education system should be created. The entirely different mentality from the parents is essential as well and that can be achieved by reading the Talmud.

Tell us what you think about Korea and what we need the most to have a better educational environment.

I served in the U.S. Air Force in Osan for six months in 1962. Korea was still suffering from the Korean War. It was very poor, it was struggling very much and many people were very pessimistic. Coming back to Korea today, you can see a modern miracle. When I was here, there were no skyscrapers, no subways and no highways. It is beyond imagination the recovery of Korea over the last 40 years. And I was so anxious to visit Korea and see the miracle of South Korea with my own eyes. One question I have is whether Korea could advance with technology and at the same time [not] lose its soul.

I hope it does not lose its soul. And I believe that Jewish wisdom and insight can greatly benefit the Korean people.

Hence, the Talmud should be translated in Korean as well. China, Japan and Russia are currently translating more selections of the Talmud now.