Traveling far away for a love of Dokdo

Traveling far away for a love of Dokdo 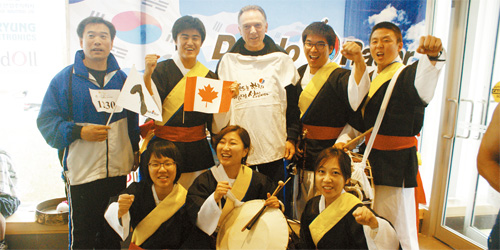 The Dokdo Racers in Samulnori costumes pose for a photo with Peter Kent, minister of state for Foreign Affairs of the Americas in the Canadian Cabinet, in Toronto, Canada. The T-shirt Kent is holding reads “Dokdo is a Beautiful Island of Korea.” Han Sang-yeop, Jung Jin-won, Bae Sung-hwan, Yoon Ji-young, Lee Hanna and Choi Ga-young (from top left) are the proud Dokdo Racers. Kim Young-joo, the seventh member, joined the team in June for the African tour. Provided by the Dokdo Racers

Their rallying cry was: “Dokdo is a beautiful island - of Korea!”

The Dokdo Racers, six college students and a schoolteacher who resigned, visited 30 cities in 18 countries over 323 days from Aug. 14, 2009, to July 3, 2010, to inform foreigners that Dokdo belongs to Korea, not Japan.

Dokdo Island, called Takeshima in Japan, has been at the center of a territorial dispute since the 1950s.

During their travels, the Dokdo Racers held seminars and lectures about Dokdo in local colleges, taught Korean children living abroad about Dokdo and collected more than 1,500 “foot signatures.” The “foot” effort was similar to a signature-seeking campaign except you leave your footprint, to support the view that Dokdo belongs to Korea.

Bae Sung-hwan, who resigned as a middle school physical education teacher to join the team, added: “I always emphasized to my students that it is very important to take on a challenge and not be afraid to fail. I wanted to actually show them and many other young people courage and love for the country.”

The time they put into the project far exceeds just one-year’s time. To prepare for the trip, the seven students lived together in a house in Sillim, Seoul, for six months. Four of the students took a leave of absence from school for a year and a half.

Not only did the students organize every part of the trip, they also contacted Korean communities, Korean student organizations and Korean embassies all around the world to ask for help.

“It was especially difficult to contact Korean communities in Europe,” said Choi Ga-young, an economics major at Seoul National University.

As for actually living together, Kim Young-joo, a mechanical engineering major at Yonsei University, said it helped them to understand each other.

“The reason for living together was not only because there was a lot to prepare, but also to learn to work with each other. We had to prepare ourselves for spending a year in foreign countries together. Without the six months’ camp training, it would have just been much more difficult,” said Kim.

The students worked part-time jobs to pay for the house rent as well as to earn money for the trip.

Han said they earned about one-third of their total expenses. “The rest came mostly from Nonghyup. Their generous sponsorship greatly lessened our burden,” said Han.

Although the major purpose of the Dokdo Racers was to inform foreigners about Dokdo, they also introduced Korean culture by performing Samulnori, Korean traditional percussion music, and Taekwondo on the streets and in theaters.

“We thought it was more important to first engage foreigners and make them interested in Korea before talking to them about Dokdo,” said Bae. “We thought about what would be the most effective in attracting foreigners’ attention, and the answer was Korean culture. We received fervent response for our Samulnori and Taekwondo performances.” Bae was the one who demonstrated Taekwondo in front of foreigners.

Choi recalled that her most memorable performance was in Cusco, Peru. “Our venue for the performance was a huge municipal theater with 700 seats, but only about 20 people came. We went all the way there and couldn’t perform in front of 20 people. So, we went outside and played Samulnori as we circled around the theater. In only a few minutes, a huge crowd was following us. We led them into the theater, which then was almost full. The entire performance was in Spanish and perhaps because we were Asians from far away trying to communicate with broken Spanish, people cheered and shouted with joy every time we said anything. ... After it was over, a man wanted to give each of us a ride on his shoulders, saying he was so touched by our passion. There was also another man who wrote a poem for us about Dokdo.”

The Dokdo Racers first started traveling in North America, and then moved on to Latin America, Australia, Europe and Africa. In every city they went, the Dokdo Racers collected people’s ink footprints, symbolizing that they have stepped on Dokdo and recognize the island as Korea’s.

“When we collected footprints in Korea before the trip, some of us painted ink on people’s feet and others wiped off ink from their feet after they stamped ink footprints,” said Choi. However, before leaving for the trip, Chung Jin-won, an aerospace mechanics major at Seoul National University, invented a footprint machine, which allowed people to leave ink footprints without having to paint their soles with black ink.

“If you put your foot on the machine and press down gently, your ink footprint is stamped on the paper underneath the machine. It greatly facilitated our collecting the footprints.”

Their last destination was Japan. They expected animosity, but what they experienced was far from the expectation.

“We asked people on the street whether Dokdo was Korean or Japanese territory, and some even said they were fine with it belonging to Korea. I felt that even though the Japanese government is trying to take Dokdo away from us, we wouldn’t let that happen so easily,” said Kim.

The group is having an exhibition displaying photos from the trip at Metro-museums in Kyoungbok Palace station and Seoul National University station. Next week, they will visit Ulleng Island and Dokdo to donate the 1,500 foot signatures they collected to the Dokdo Museum.