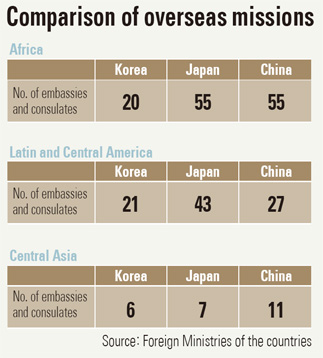 As a spying scandal in Libya tests Korea’s diplomatic skills in the developing world, experts warned that the government could face similar trouble in numerous other countries without fundamental changes in the management of its diplomats.

An unbalanced distribution of resources, inclined toward major countries, a mediocre budget and inefficiencies at the Foreign Ministry could dash the country’s hope of being a “bridge” country uniting advanced and developing nations, they said.

“Given the current manpower at the Ministry of Foreign Affairs and Trade, having a less-than-desired diplomatic performance in Africa is not surprising,” said Kang Seon-jou, a researcher at the Institute of Foreign Affairs and National Security, referring to a report by the Board of Audit and Inspection report on Wednesday that reported the number of embassies and staff in Africa dropped over the past two decades, which led to $1.3 billion in lost export opportunities.

“To achieve the balanced diplomacy the government desires,” Kang said, “it should have the workforce and resources consummate with its goal.”

As of February, the Foreign Ministry had 2,139 employees, including 1,161 in overseas posts. But the Netherlands, with a population a third of Korea’s, has 50 percent more diplomats. Spain, which has a per capita Gross National Income similar to Korea’s, has more than 6,000 diplomats. Denmark has a similar number of diplomats as Korea, while having only a tenth of Korea’s population.

Japan had around 5,600 diplomats last year but plans to increase its corps by 2,000 over the next few years.

The other problem, Foreign Ministry officials said, is that the better part of the workforce is dispatched to major regions such as the United States and Europe.

In a meeting with reporters earlier this week, Foreign Minister Yu Myung-hwan expressed concern over the paucity of Korean diplomats in regions such as China and the Middle East, whose importance have increased.

“I started working at the ministry in 1973, but over the past 37 years, the number of people at the ministry dealing with China, the Middle East and some other regions remains the same,” Yu said.

Money is the problem, he said.

The budget for the Foreign Ministry this year is 1.29 trillion won ($1.1 billion), only 0.4 percent of the total 2010 government budget of 292.8 trillion won. Other advanced countries like the Netherlands spend more than 3 percent of their budgets on diplomatic resources.

“To substantially increase the workforce and the number of embassies, our budget should be at least 1 percent of the national budget,” said a Foreign Ministry official.

Ministry officials also said that the majority of their meager budget is being used on fixed costs and rent for overseas embassies, leaving only tens of billions of won in the hands of the ministry for the use of diplomacy.

“There is misconception among not only the public but fellow government officials that diplomats are just enjoying parties overseas,” Foreign Minister Yu told reporters, explaining why his budget is pinched.

Ko Jae-nam, a professor at the Institute of Foreign Affairs and National Security, said without a substantial increase in the budget, Korea will unlikely become a representative voice of less developed countries, one of its goals as host of the G-20 summit in November.

Some experts said the budget is not the only problem.

Too much focus on the economic-oriented diplomacy has aroused antipathy against Korea in many countries, they said.

According to people with knowledge of the ongoing spy scandal with Libya, Tripoli’s harsh reaction reflects a bitterness that it hasn’t got much from its relations with Seoul despite all the money Korean companies have earned from construction contracts and other businesses in the country.

An intelligence official at the Korean Embassy in Libya was deported in June on a spying charge, straining the 30-year ties through which Korea has won $35 billion worth of building projects alone.

“Diplomacy should be carried out in ways that win favor from the other country, but Korean diplomacy has been too focused on gaining economic benefits,” said Seo Jeong-min, a professor at Hankuk University of Foreign Studies.

Seo said a dearth of diplomatic resources and finesse could backfire again as Korea is pressured to join international sanctions on Iran. “If the government has sufficient manpower to placate Iran about the possible sanctions, it could minimize the fallout,” he said. “But whether it can do so remains to be seen.”

Bae Sung-in, an international relations professor at Hanshin University, faults the ministry’s recruitment and management system. In its current system, diplomats are selected through a standard learning-by-rote test and they are transferred every three years. That system only produces generalists, Bae said.“To be able to employ more delicate diplomacy, the government needs to hire experts in each region and assign them to their specialized region for a long-term period,” he said.

Some experts say the government also has to come up with a system to coordinated diplomacy carried out by individual government agencies, including the Foreign Ministry and the Ministry of Knowledge Economy.

The government can convenes an intra-ministerial meeting presided over by the prime minister, but such meetings are usually called when problems or complex issues arise.

Chung Woo-jin, director of resource development division at the Korea Energy Economics Institute, said the government needs to make those regular meetings. “Each government agency, like the Foreign Ministry and the Ministry of Knowledge Economy, are cooperating on diplomatic issues, but that is limited to sharing information,” Chung said. “More organic intra-ministerial cooperation is needed for drafting and executing comprehensive resource diplomacy strategies.”