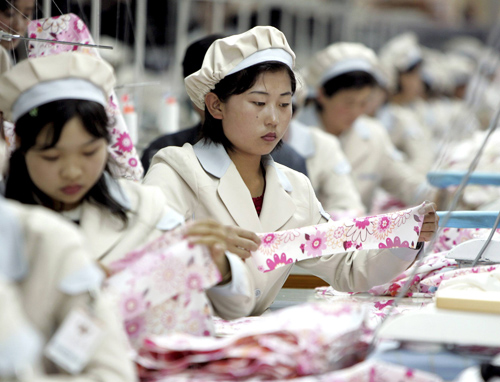 North Korean workers prepare clothes at a factory of South Korean apparel maker Shinwon in the inter-Korean industrial park in Kaesong, North Korea, in this May 26, 2005 file photo. Despite months of war-like rhetoric, North and South Korea reached agreement yesterday on a wage increase for workers at the complex. [REUTERS/YONHAP]

South Korea has agreed to raise the minimum monthly wage for North Korean workers by 5 percent at the two countries’ joint industrial park in the communist state, an official said yesterday.

The latest increase, which was agreed to Thursday, is in line with 5 percent annual hikes in the preceding three years, Unification Ministry spokesman Chun Hae-sung said in a briefing. The minimum wage for North Korean workers now stands at $60.775.

North Korea has demanded wage hikes for its workers in the border town of Kaesong since early this year. About 120 South Korean firms operate there, employing 44,000 North Korean workers to mainly produce labor-intensive goods.

The estate is considered the last remaining symbol of reconciliation between the two sides.

“Our companies agreed to allow the increase, and we have also agreed it would be appropriate to increase the minimum wage by 5 percent, after hearing opinions from the firms,” Chun said.

Under an agreement with North Korea, South Korea may increase the minimum wage by up to 5 percent each year. The new raise will be effective for one year starting Aug. 1, Chun said.

The increase comes as tension simmers between the two countries, which fought the 1950-53 Korean War that ended in a truce, not a peace treaty.

Following the deadly sinking of a South Korean warship near the Yellow Sea border in March, Seoul has demanded an apology from Pyongyang and is holding a massive five-day anti-submarine drill in the area this week.

The North, which denies its role in the sinking that killed 46 sailors, has threatened “strong physical retaliation.”

In a related development, South Korean government officials said Friday that Seoul and Washington have recently conducted war games to prepare for a possible South Korean hostage situation in Kaesong.

South Korea has halved the number of its nationals staying in Kaesong due to safety concerns since May, when it warned it would not tolerate any North Korean threat or harm to them.

The Kaesong complex began operating in 2004 after being agreed upon by the leaders of the Koreas in a summit four years earlier. The companies there have expressed concerns that the erosion in inter-Korean relations was affecting their businesses.