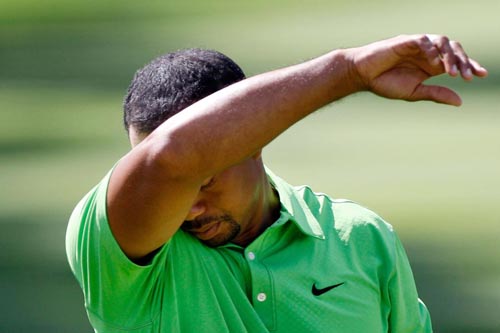 Tiger Woods had his worst score in relation to part through 54 holes since turning professional in 1996 at the Bridgestone Invitational on Saturday. [AFP]


AKRON, Ohio - Tiger Woods logged another miserable round and then all but conceded the world No. 1 ranking to Phil Mickelson.

In the third round of the Bridgestone Invitational on Saturday, Woods had five bogeys, a double-bogey and two birdies in a 5-over 75. He is 11 over - his worst score in relation to par through 54 holes since turning professional in 1996.

Woods, whose personal life has been in tatters since revelations of infidelity last November, has been the No. 1-ranked golfer in the world for more than five years. But Mickelson can overtake him with a high finish - something that Woods fully expects.

“Well, if Phil plays the way he’s supposed to this weekend, then he’ll be No. 1,” Woods said after completing third-round play at Firestone Country Club.

Mickelson shot a 71 to fall into a tie for 10th. He needs to finish at least in fourth place alone to become No. 1.

A week before the U.S. PGA Championship and with six weeks left to the Ryder Cup, Woods’ game is in shambles.

He actually drove the ball slightly better on Saturday, hitting half of the 14 fairways, but showed no consistency.

He was 1 over through six holes, but then jerked an iron far to the left of the green and into a large bunker next to the par-3 seventh.

“Great swing!” he yelled at himself on the tee. Woods then blasted out of the sand to 25 feet above the hole and missed the par putt.

On the eighth hole, he hit his drive into the right rough, advanced it farther along in the high grass to the right, and then mis-hit a chip shot that came up short of the green. He hurried to the ball and quickly hit another chip that ran 6 feet past the hole, then missed that putt, settling for a double-bogey.

“Well, I drove it terrible, hit my irons terrible, didn’t putt well, and it added up to a lot,” Woods said later.

The 75 was his worst third-round score in relation to par since the 2002 British Open, where he shot 81.

After completing his round, he returned to the driving range. At that time, he was 18 shots off the lead and in 78th place, ahead of only two other players in the 80-man field.

He has never been worse than a tie for 71st through 54 holes since turning pro.

He took off for two weeks after tying for 23rd at the British Open, and hoped to use the Bridgestone as a tuneup for next week’s U.S. PGA Championship at Whistling Straits.

He also hoped to put up a strong finish that would move him up in the U.S. Ryder Cup standings. He came into the week in ninth place, with the top eight players assured of spots on the team.

The timing seemed to be ideal, since he has dominated the Bridgestone and Firestone Country Club like few players have anywhere. He won the Bridgestone (and its forerunner, the NEC Invitational) from 1999-2001, 2005-7 and last year.

But instead of setting himself up for the final major of the year and the game’s top team competition, his play has caused many to question whether he is the same player who captured 14 major championships before his 34th birthday.

Woods was asked if he could take anything positive out of his three rounds so far this week.