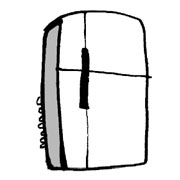 Before air-conditioning, humans in many countries invented devices to endure the heat.

In Iran in the 4th century B.C., there was the yakhchal, a cone-shaped room used to store ice. These ancient icehouses allowed people to keep ice in the middle of the desert.

In China, too, ice cut from snow-covered mountains or frozen rivers was stored in icehouses built of stone during the Warring States Period. As only those in high offices were permitted to cut and store ice, the word beolbing, or cutting and storing ice, was used as a synonym for success. According to the history book Samguk Yusa, or “Memorabilia of the Three Kingdoms,” icehouses existed during the reign of King Yuri, the third king of the Silla Dynasty (57 B.C.-935).

Since the Goryo Dynasty (918-1392), the government distributed ice to government officials in summer. This was called banbing, or ice rationing. As ice was rare and precious in summer, the priority was given to the royal court, royal family members and high-ranking officials. But because ice was also doled out to retired officials, the elderly and patients at government medical institutes, there was a social welfare aspect to the service as well.

According to the Mangiyoram, or a general survey of state affairs, there were two icehouses - Dongbinggo and Seobinggo - in Hanyang, today’s Seoul, during the Joseon Dynasty. In Seobinggo alone, some 135,000 ice cubes were stored and distributed according to the bingpae, an ice ration tablet on which the amount of ice officials could take home according to their rank and job. At the time, one could show off the bingpae, instead of the mapae, which was issued to a secret royal inspector, as a proof of one’s prestige.

Given the nature of the distribution project, it naturally created controversies. In 1469, the first year of King Yejong’s reign, the king strictly prohibited officials from smuggling ice and selling it to civilians after such cases were uncovered. When King Seongjong the Great ordered that ice be distributed to prisoners, Kim Jong-jik, a prominent scholar, praised the king, writing that “amidst concerns about the sufferings of his people due to the summer heat, the king has granted royal permission to distribute ice even to prisoners.”

To save energy, the government recently instructed all government offices not to run their air-conditioners at below 28 degrees Celsius (82 degrees Fahrenheit), even though supermarkets or department stores operate at below 26 degrees Celsius. It aroused lots of complaints. People understand that the amount of electricity on reserve drops during peak seasons. However, there is a more efficient means of maintaining the reserve, such as regulating electricity consumption, instead of enforcing higher room temperatures. In this heat, I worry that the effects of this policy will generate more negative energy than it will save.