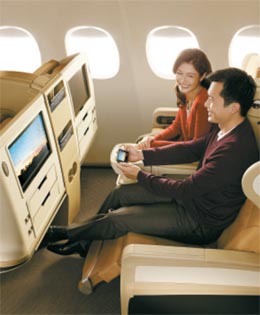 A passenger in business class watches a seat-back TV that is connected to his iPod on a Singapore Airlines flight.

With new attractions opening up in Singapore at a rapid clip, the best way to see the city is to have absolute freedom rather than sign up for rigid, fixed tours. That’s where Singapore Airlines comes in, offering special flexible packages under SIA Holidays, the company’s own brand of tour products. The best aspect of SIA Holidays is that tourists can customize their packages according to their budgets and hotel preferences.

Throughout the summer and fall, SIA Holidays is promoting several attractive packages to help visitors from Korea explore the city. The most basic is the two-night, three-day SIA Holidays Singapore package, which starts at 479,000 won and includes a round-trip economy class ticket on Singapore Airlines, two nights in a hotel and airport-hotel transfers. The package is on sale until the end of September and is good for travel until March 31.

The second package, which starts at 590,000 won and is valid until Sept. 30, gets you five-star accommodations at the Fullerton Hotel in addition to everything in the first deal. SIA Holidays is also offering its “Sentosa Getaway” deal where customers get a one-day pass to Universal Studios Singapore in addition to an additional attraction package. The deal includes airfare, hotel for three nights with daily breakfast, transfers and entry to the island. Prices start at 889,000 won.

The “F1 Singapore Grand Prix” package catering to motor sports fans gets you airfare, three nights in a hotel, airport transfers and admission to all three days of the race ? which begins on Sept. 24. Prices start at 975,000 won. Lastly, the “2010 August Highlights” package includes airfare, two nights in a hotel with daily breakfast, airport transfers, a half-day city tour, unlimited rides on the SIA Hop-on Bus, a ticket to the Games ? which run from Aug. 14 to 26 - and other perks. The price starts at 539,000 won.