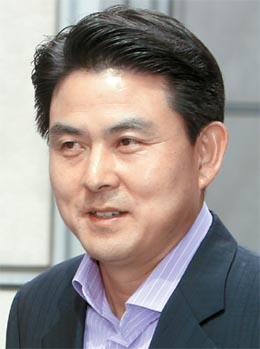 Kim Tae-ho, 47, was named yesterday as the prime minister-designate.

Kim Tae-ho, the 47-year-old former governor of South Gyeongsang, was named the prime minister-designate yesterday in a massive cabinet shake-up by President Lee Myung-bak in an experiment of generational change and reform.

Lee also replaced seven ministers, inviting seasoned politicians including three incumbent Grand National lawmakers into his cabinet, in a move aimed at solidifying his control of state affairs during the second half of his term. “The cabinet reshuffle intends to comply with the public demands of reform, portrayed through the June 2 local elections and July 28 by-elections,” Hong Sang-pyo, Lee’s senior public affairs secretary, said yesterday. “It also aims to strengthen the basis of implementing working-class friendly policies through communication and harmony.”

Replacing Prime Minister Chung Un-chan, a 64-year-old Princeton-educated economist, with the 47-year-old native of South Gyeongsang, who headed his hometown province from 2006 until this year, appears to be the key element of Lee’s cabinet reform.

“Appointing a young former provincial governor, who is a self-made man from a farming village, as the prime minister summarizes the characteristics of the new cabinet,” said Hong. “In other words, it is a young cabinet capable of communication and social cohesion.”

Kim will face a confirmation hearing at the National Assembly, and the Blue House will request the legislature’s approval before the end of this week, Hong said.

If the nomination is confirmed, Kim will be the fifth prime minister to assume the post who is younger than 50. Korea has had four prime ministers who were appointed in their 40s, but no appointment of a young prime minister has been made since 1971.

Kim’s successful governance of South Gyeongsang and his strong leadership were the main reasons that Lee chose him as the new prime minister, the Blue House said. The youthful spirit of Kim will allow the cabinet to better communicate with the younger generation and working-class people, it said. 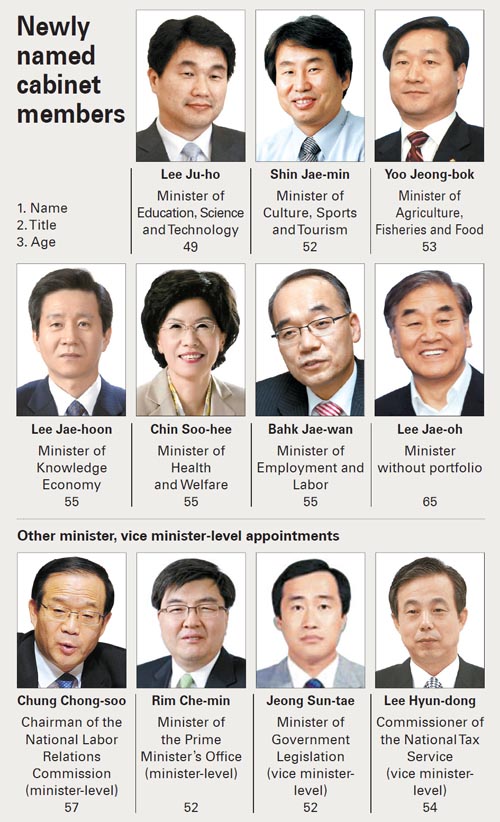 Bahk Jae-wan, former senior presidential secretary for state affairs planning who left the Blue House in last month’s reshuffle, was returned as Lee’s labor minister. Bahk, a former GNP lawmaker, had been in charge of the Lee administration’s failed attempt to revise the Sejong City blueprint. He was also the architect of Lee’s pet project to restore and develop the nation’s four major rivers. Bahk’s administrative expertise and strong passion for his work are expected to support the government’s efforts to create jobs, the Blue House said. Lee Jae-hoon, former knowledge economy vice minister, was named the minister of knowledge economy to lead the nation’s green growth and energy strategies and to present new industrial and trade policies based on his expertise, the Blue House said.

While largely replacing his key ministers, Lee retained his foreign and defense ministers, despite expectations that they would be fired in the aftermath of the bungled management of the Cheonan’s sinking. “As you all know, the G-20 Summit will take place in November,” said Hong. “The current ministers have been working on it for a long time, and consistency was extremely important, so they were not included in the shake-up. I cannot say whether they will be replaced or not after the event, because that’s something the president will decide in the future.”

Perhaps in a move to stop criticism that Lee favors appointing wealthy and older officials to his cabinet, the Blue House stressed that the new team is much younger and less rich. Yesterday’s reshuffle was the fourth since Lee first formed his cabinet in February 2008.

The Democratic Party yesterday criticized Lee’s new cabinet. “Lee’s bodyguards are placed on the frontline in this worst reshuffle ever in the country’s history,” said DP’s spokeswoman Rep. Jeon Hyun-heui.

The ruling Grand National Party, however, hailed the shake-up. “Officials who are capable of achieving agendas of working-class friendly policy, communication and social cohesion during the second half of Lee’s term are selected,” said GNP spokesman Ahn Hyoung-hwan.

While the Blue House said “communication with the public” was the keyword for the latest shake-up, pro-Lee Myung-bak and pro-Park Geun-hye factions inside the GNP focused on other details of the appointments - communication within the factions.

Loyalists of Park, one of the strongest contenders for the next presidential election, expressed concern that Kim’s appointment as the new prime minister could be a part of Lee’s plan to groom a successor. “Expectations are high for a young, [aggressive] prime minister,” said Rep. Gu Sang-chan, a pro-Park lawmaker. “But from the perspective of the pro-Park faction, there is room for misunderstanding that the president is nurturing a rival to fight Park.”

But Gu spoke positively about Lee Jae-oh’s appointment as a special minister. “The most important goal for him will be [pro-Lee faction’s] mutual survival, communication and harmony with the pro-Park faction,” said Gu.

Pro-Lee lawmakers also support the president’s decision to invite a Park loyalist with high political profile into his cabinet. Yoo, named the new agricultural minister, was the former chief of staff for Park.