A homecoming for butterflies from Hungary

A homecoming for butterflies from Hungary 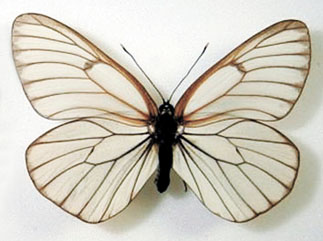 Two thousand butterfly specimens were returned from Hungary late last month. Black-veined white butterflies, the same kind of this photo, are among the specimens. [JoongAng Ilbo]

Two thousand insects, carefully preserved, will be officially returned to their homeland as early as today - for some, in more than 30 years.

The Korean National Institute of Biological Resources told JoongAng Ilbo yesterday that 2,000 butterfly specimens are waiting to be processed through customs after being brought into the country late last month.

The specimens were sent from the Hungarian Natural History Museum in Budapest, Hungary, and were part of the 300,000 Korean insect specimen collection in the museum’s possession. Another batch of 500 or so insects, such as beetles, will also arrive from Hungary within the end of the year.

South Korean experts expect to learn about the change in insect dispersion inside the peninsula as well as changing weather patterns.

“The black-veined white [butterfly], which has been designated as a first-class endangered species in the nation by the Ministry of Environment, is also included in the collection,” said Park Seon-jae, an insect expert at the biological resources institute.

The black-veined white has not been observed in South Korea since 1998. The 2,000 specimens, contained in seven wooden boxes, were returned to South Korea after they were taken by Hungarian researchers who were sent to North and South Korea for specimen samples over 27 visits from 1970 to 2007.

Korean researchers say this was a unique case - in fact, this is the biggest number of insects to be returned to the country. “We persuaded the Hungarians to return the insect specimens that were taken from Korea by visiting the country twice last year and suggesting we start joint research on the insects,” said expert Oh Kyung-hee at the institute.

The two countries will create an insect database as well as an illustrated guide with a budget of 50 million won ($43,000).

Despite this being an unprecedented move by a foreign museum, Korean experts believe Hungary was nudged toward returning the insects because of its struggling economy.

Analysts believe that about 1.5 million insect specimens were taken by foreign researchers in from the North Korean territory, after North and South Korea were separated, and some date back as far as a century ago.