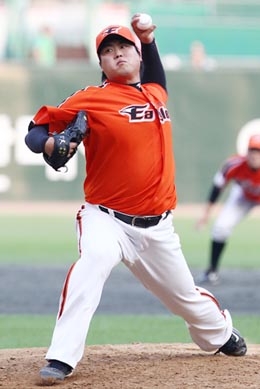 Ryu Hyun-jin of the Hanwha Eagles was designated as July’s most valuable player by the Korea Baseball Organization (KBO) yesterday.

The southpaw pitcher has been nothing short of dominating this season, posting 21 quality starts in all of his 21 outings on the mound.

A pitcher is deemed to have had a quality start when he pitches six innings and allows no more than three earned runs in the game. The statistic serves as another way of measuring the success of starting pitchers aside from their win-loss records and earned run average - or ERA.

Ryu has posted a record of 14 wins and three losses with an ERA of 1.59 so far this season despite playing for the woeful Eagles, which sit seventh overall in the league standings with a record of 39 wins and 60 losses.

The next best pitcher in terms of quality starts is Bong Jung-keun of the LG Twins. The veteran southpaw hurler - who formerly pitched in the Major League Baseball league in the United States - has 15 quality starts in 22 outings this season. Bong holds a record of nine wins and seven losses with an ERA of 3.31.

“It’s impressive for a pitcher to post consecutive quality starts like Ryu has done this season,” said Sun Dong-yol, a former pitcher and the current manager of the Samsung Lions. “It allows the coaching staff to maintain a balance in the way it uses its middle relievers and closers. Having said that, I think it’s more impressive to toss a complete game and allow less than four earned runs in a game.”

Sun isn’t as impressed with the stats because he himself put up some hard-to-beat numbers back in his playing days. While pitching for the Haitai Tigers from 1985 to 1995, Sun posted a record of 146 wins, 40 losses and 132 saves with 1,698 strikeouts and an ERA of 1.20.

In the early days of the KBO, dominant pitchers like Sun would play the role of both starting pitcher and closer. “During the peak of my career, if I tossed six innings and gave up three runs, I would have thought I was not in the best shape for the game,” Sun said. “The concept of quality starts did not exist when I was a player.”

“A pitcher has done more than his share of work if he pitches six solid innings,” Choi said. “Ryu’s performance this season is truly impressive. Allowing three earned runs or less in six innings of work sounds easy, but that’s not the case.”