One of a thousand

One of a thousand 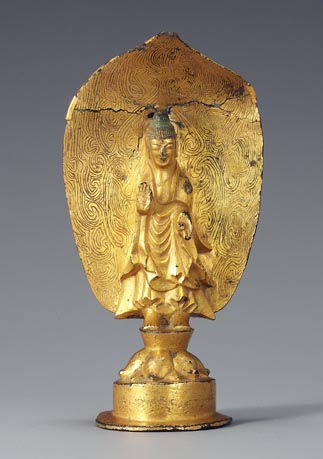 Name: Buddha with the inscription, “The Seventh Year of Yoenga”


This image of Buddha is the oldest of all Buddha-prathima (Buddhist statues) engraved with production dates. According to the inscription on the back, the model was one of a thousand Buddhist statues made in a Buddhist hall in Pyongyang, the capital of Goguryeo, ancient Korea, in Chinese year 7, or 539 A.D.. Since it was discovered in Uiryeong, South Gyeongsang, far from its point of origin, the statue provided evidence that there could be discrepancies between an excavation site and the place of manufacture.

The statue was influenced by the Northern Chinese prototype, as evident in the Buddha’s slender face and the fin-like hems of the sacerdotal robe. And yet, its slight smile, thick garment, lotus-shaped foot stand and spirited halos are particular to the Buddhist statues of Goguryeo.