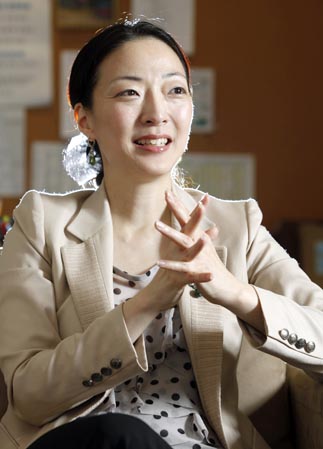 Julia Moon talks about life after dance and the challenges of being the CEO of the country’s largest private ballet company. By Lee Chan-weon

Julia Moon, former prima ballerina and current chief executive officer of the Universal Ballet Company in Korea, danced a cameo in the Seoul staging of the Korean folktale ballet “Simcheong” in May. It marked her return to the stage as a ballerina - nine years after she had retired as a dancer to take the helm of the country’s largest private ballet company.

But her command performance wasn’t her only stage appearance in recent years.

Since 2008, she has been making frequent appearances on the stage - not as a dancer but as a commentator - prior to the company’s performances. She gives a brief introduction to the plot and explains the meaning of different movements by demonstrating them herself.

The introduction is part of the company’s efforts to make dance more accessible to audiences. The company also provides Korean-language subtitles during the performance to facilitate understanding.

The company was established by Rev. Sun Myung Moon, her father-in-law and the founder of the Unification Church. Formerly known as Julia Pak, she changed her name after marrying her fiance, who died in a car accident, in a posthumous wedding. Before joining the UBC, Moon was educated at the Royal Ballet School in London and has danced with the Ohio Ballet and the Washington Ballet.

During recent interview with the JoongAng Daily, Moon seemed proud that Korean dancers are increasingly being recognized in the global ballet arena. This year, a handful of ballet dancers have earned top prizes in international competitions and gained promotions in overseas companies.

“Just 10 to 15 years ago Korean ballet fell far short of other culturally-advanced countries,” she said. “But it has advanced rapidly in recent years and we are experiencing a boom. Korean dancers are so hungry to learn, which I think is something that helps them excel.”


Q. What was it like to be on stage after a nine-year hiatus?

A. Although I danced on the stage for only two minutes, the effort I put into the performance was the same as what I expended for a two-hour production. I wasn’t spinning and jumping on stage, but my heart was pounding like crazy on the first day of the show. Then I thought, ‘Oh, I’ve forgotten what it feels like to be on stage in front of an audience.’ But it is so much more comfortable to me to express myself through music and space. Also, it was really wonderful to feel the camaraderie with the dancers on stage.

I’ve been managing the company for nine years and I still feel like fish in a bird cage, so to speak. On stage, I felt like fish back in its water bowl.

Do you want to perform again?

I had decided not to dance again, but since I didn’t have a farewell performance I wanted to take the stage one more time. Now that I’ve done it, I have to say that those two minutes on stage made me feel 10 years younger, literally. Even the next morning when I looked at myself in the mirror I was surprised that my face looked different. I don’t know how to explain it. You feel so alive. The gaze of the audience gives you energy. After the performance, someone told me my face seemed to have changed from that of a CEO to that of an artist. If there were a good role, I would think about doing it again - such as the mother of Juliet in “Romeo and Juliet.”

How do you keep in such good shape since you stopped dancing?

Initially I thought I had to do ballet at least two or three times a week. But that didn’t really happen. Realistically, I had to have meetings and other events as a CEO. Since retiring, I have danced just three to four times a year. Mostly I do jeol (Buddhist ceremonial bowing). Jeol is good for physical and mental health. I believe all religions come from one source. The meditation part of Buddhism is so nice.

A large number of dancers retire around 40. They then have to find a job, but often have few choices. How did you deal with this?

After retiring, most dancers feel lost. For this reason there are career transition centers for dancers in Europe, the U.S. and Canada. They help dancers transition from professional dancer to a new career. They are taught they were good dancers, which is something not many people can do, and that they have all the ingredients be successful in anything they do. You don’t want to lose these people, who are highly creative, motivated, versatile and strong. In Western countries, retired dancers become doctors, lawyers, salesmen, businesspeople and therapists. Inspired by those centers, I brought the concept here and built a similar institution five years ago. But what I found out is that a sizable portion of dancers in Korea are so stricken with their current financial hardship that they cannot afford to think about the future. So I changed the name to professional dancer support center. The center provides physical therapy for dancers and continues to find other ways to support dancers. I think Korean society should give greater recognition to dancers. Korean dancers hate it when people ask what they are going to do after they stop dancing because they are reluctant to even think about it. But dancers should be taught to start thinking about what they are going to do after they retire. I envy musicians in a way because we dancers who use our bodies inevitably lose stamina as we age - just when our maturity level expands to allow us to fully express ourselves.

What is the most demanding part of being a CEO?

While dancers invest in themselves in performance and exchange energy with the audience, CEOs’ lives are based on everyday life - like watering the garden. My difficulty as CEO is that I’ve never studied management in school, while other CEOs have gone through formal management training such as an MBA degree. I’m not the kind of person who likes to wave a flag and say people should follow me. But I try to create an environment where trained managers in marketing and PR can do well. I also read a lot of management-related books. It’s sort of learning on the job.

Earlier this year, UBC dancers appeared on “One Night, Two Days” [a popular entertainment show on KBS TV]. And many say the show provided the public with a good chance to get to know ballet. What else is the UBC doing to make ballet accessible?

I realized after retirement that the gap between my perception of ballet and that of the general public was incredibly huge. Nine out of 10 ordinary citizens think ballet is difficult and boring, I’ve found. It was a shock to me. When I was dancing I vaguely thought I needed an audience to watch me but my focus was not on them but on my performance. So UBC launched a Korean subtitle service in 2008 - like operas do. It’s like football - you can’t fully enjoy it if you don’t know the rules. The same applies to ballet, I thought. The cast of the Modern Ballet Project did a performance in Gwanghwamun Square in July to promote the work and the PR and marketing team has developed an iPhone game application about Simcheong. You always have to be alert in Korea because trends change so rapidly here.

What is next for you?

Now that I’m 50 years old, I think I need to develop a management system that I can transfer to my successor in 10 to 15 years. There are private companies that regress in the second generation of management. I am preparing so that does not happen with my company.