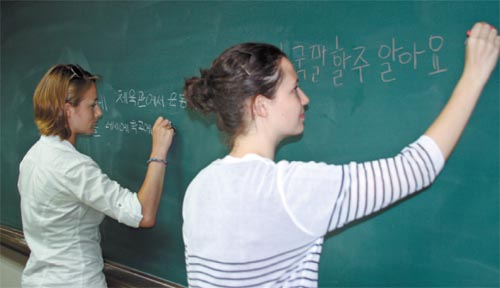 
Anna Kranier, a 17-year-old student from New York, is asking her teacher, Park Joo-young, in Korean whether she got the grammar in her workbook right during class at Sogang University’s Korean Language Education Center in Mapo District, Seoul, one afternoon last week.

After class she practices her writing: “I watch movies and eat at restaurants on Fridays. I usually go hiking on Mondays. Yesterday, I worked out at the gym. I studied at school today at 4 p.m. Later, I have an appointment with a friend at a coffee shop.”

The sentences were errorless, which is impressive considering that Kranier had not studied Korean before entering the program.

Kranier is one of 48 students from the National Security Language Initiative for Youth, a high school program organized by the U.S. State Department. The NSLI-Y is a growing American youth language initiative created in 2006.

Until 2008, the program only offered classes in Chinese and Arabic. With support from the U.S. Congress, however, the program expanded to include five more languages: Farsi, Hindi, Korean, Russian and Turkish. The students who joined the program went through a tough admissions process that included essays and two interviews. About 1,500 students competed for 600 spots.

Sogang University is renowned among expats for its Korean language program, which focuses on conversation skills.

“In the beginning, we were worried the students might not be able to keep up with the program, but they caught up quickly after the first week,” Kim Hyun-jung, a program coordinator at the university’s Korean Language Education Center, said. “The program is focused on teaching everyday conversation skills. I think students become more interested in learning when they actually use what they learn.”

The program also includes instruction in writing, reading and listening and consists of three levels: beginner, intermediate and advanced. Students were assigned to classes after taking a placement test on the first day.

Judy Heflin, a high school student from California who learned Korean for two years before arriving here, said, “Reading and writing are not that difficult, because Korean has a pretty simple alphabet, but speaking correctly is very hard.”

Learning Korean is not the only thing the students are here to do. They are also encouraged to experience Korean culture by meeting friends and exploring the city.

“I am given an astounding amount of freedom,” said Kranier. “I took a solo trip to Gwanghwamun this morning. I also visited two Buddhist temples in Seoul, Jogye Temple and Bongeun Temple.”

While in Korea, the students stay with host families who provide them with food and boarding. Despite the language barrier, most students seem pleased with their host families.

“I spend lots of time with my host family and they are very nice people,” Heflin said with a smile.

There is less than a week left until the 30 students are scheduled to return home (the other 18 will stay here as exchange students in Korean high schools). Many of the students plan to continue learning Korean and some hope to return to Korea one day.

“Of course I am going to continue learning Korean. I love Korea! I don’t want to leave,” Heflin said, “I am planning to apply to Yonsei University’s Underwood International College next year and am really hoping to get in.”