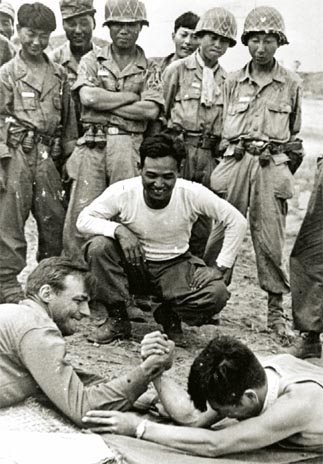 An arm wrestling contest pitted members of the UN allied forces against ROK soldiers, while members of the ROK Army looked on with interest. The time and location of the photo have been lost. [JoongAng Ilbo]

Last week, General Paik described how he personally turned back a ROK retreat when enemy troops threatened to break the allied defense lines.


I’ve mentioned this on several occasions, but I am not a great shot. Never was. Even during shooting drills, I was always ranked below average. In short, I was a commanding officer with a below average shot.

I don’t know what others would make of this, but that’s who I was. I wasn’t the confrontational, in-your-face type either. I would mostly attempt to stop fights, but didn’t get involved in scuffles myself. I wasn’t the type to get easily excited.

But what I could be confident about was that I had the ability to endure and persevere. I had the patience to listen closely to others. The ability to provide an attentive ear to others was one of the only positive aspects of my personality.

When facing a desperate situation and overcome with the thought that I could not back down any further, I would will myself to persevere to the end. It’s the reason I was able to complete my service in the ROK Army with some success. Such strength might have come out of the desperation of knowing we were facing imminent danger.

I guess that’s how things played out on the hills overlooking the Bowling Alley when I persuaded my men not to retreat. The men of the ROK 1st Division, 1st Battalion, 11th Regiment fought a courageous battle despite facing the possibility of death. They were able to defeat the enemy troops in what I could only describe as a miraculous victory. 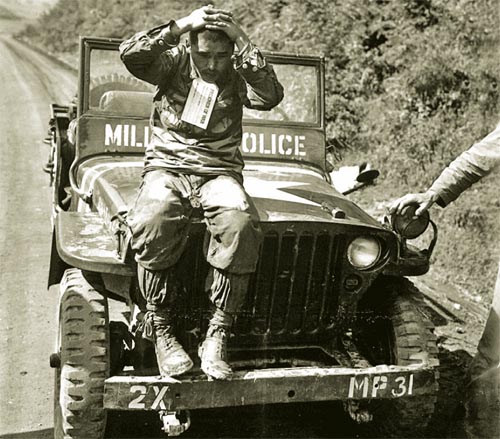 A North Korean prisoner of war, captured at the Nakdong line in early September 1950, sits on top of a U.S. Army jeep as he waits to be moved. The enemy forces began to show signs of retreat after failing to penetrate the allied forces’ defensive line in late August. Provided by the US National Archivees and Records Administration


I think the enemy troops thought that the men of the 1st Battalion were returning to the battle after fleeing because they were supported by reinforcement troops. It must have been deflating for the North Koreans to see a rejuvenated group of ROK soldiers charging up the hill. The North Koreans were no match for the determined men of the 1st Battalion, who went yelling and charging into battle.

Considering there’s a chain of command with responsibilities that come with each rank, it was foolish for me to run at the head of the group as a commanding officer.

A typical military unit consists of combat-capable, combat support and non-combat-oriented sub-units. A commander responsible for an entire unit must carry out strategic planning. Regiments execute those plans and battalions are similar in that respect. That is why commanders are usually stationed in battalions or higher. Companies and platoons are combat-oriented outfits that carry out strategies and tactics drawn up by units higher up in the military hierarchy. Unit commanders must manage the big picture by making decisions related to the positioning of men, supplies and firepower support, among others.

For a commander to take to the front lines and lead his men in combat with his weapon drawn is almost unheard of. However, things do not always go according to military textbooks in combat. In the most desperate of situations, when the going gets tough, things almost never occur as taught in military schools or training. This requires commanders to improvise. The reason I took the lead and charged up the hill towards enemy troops only indicates how desperate the situation was at that point. I’m sure anyone in my position would have chosen to go down the same path. We faced losing everything we had so desperately fought for, and also faced the risk of losing the entire war. Having convinced my men to return to battle in the hills surrounding the Bowling Alley, the day ended with the allied troops in a very favorable position.

The enemy troops had gambled, throwing almost everything they had at the allied forces and coming up short. With their lines depleted and spread thin, allied forces could finally start planning ways to fight back instead of being on the defensive. 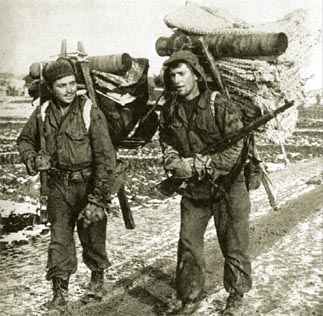 The U.S. 27th Infantry Regiment had been observing what was taking place. Colonel Michaelis, who had been waiting for me at the foot of the mountain, came looking for me right away.

He first apologized for what had taken place earlier that day.

“I found new respect for the ROK Army witnessing the commander actually direct his men in combat,” said Colonel Michaelis.

Colonel Michaelis and I became quite close after the incident. We became good friends - as if we had known each other for over a decade. We had earned the trust of our allies with our efforts on that hill.

As part of a joint operation, it is imperative for the armies involved to carry out their tasks to the best of their abilities in order for the entire operation to succeed. The failure to do so could have been dangerous to me and my men, but could also have resulted in even greater danger for the allies involved in the battle.

If we had failed to hold the mountains to both sides of the valley, Colonel Michaelis and his men could have faced heavy casualties. Similarly, if the U.S. troops failed to stand their ground on Ganseon Road, we could have faced a very unfavorable situation. Trusting the other party involved and having faith that they will put their lives on the line in an effort to succeed in battle are at the core of joint operations.

I had an opportunity to meet Colonel Michaelis in Cheongju, North Chungcheong, a month later. Having succeeded in defending against the strong offensive onslaught of enemy troops, the allied forces were now ready to makes their push up north. The ROK 1st Division was located in Cheongju at the time and the U.S. 27th Infantry Regiment was stationed near Mount Songni.

Colonel Michaelis came to Cheongju and I planned a gathering at the Chungcheong Provincial Government building. We had makgeolli rice wine, kimchi and B-rations, which consisted of canned sausages and meat.

“Commander, where is the ROK 1st Division headed next?” Colonel Michaelis asked.

“We’re going to be attacking Pyongyang,” I said.

Colonel Michaelis paused and looked eager to join us.

The enemy troops might have gained a lot of ground in pushing the allied forces to the southeastern corner of the peninsula before support could arrive, but they did not have a lot of time on their hands. U.S. reinforcement troops were steadily arriving and the entire U.S. Army 2nd Infantry Division landed in Busan in late August. The British Army’s 27th Brigade from Hong Kong arrived in Korea soon after.

In late August 1950, the ROK 1st Division departed Dabudong with the U.S. 1st Cavalry Division and headed for Hayang, North Gyeongsang. It was an area located north of Mount Palgong that had previously been under the supervision of the ROK 6th Division, and the defensive line was 12 kilometers (7.5 miles) long. Having spent the month of August defending Dabudong, we now had to plan counteroffensive tactics.

The U.S. 1st Cavalry Division also came up with new plans for the Dabudong area. Departing from the strategy used by the ROK 1st Division and the U.S. 27th Regiment, the 1st Division decided not to focus on defending Mount Yuhak, Mount Suam and other hills in the area and instead decided to fight their battles at ground level with the support of tank and artillery units. Due to this sudden strategic shift, the enemy troops briefly took control of the core region. This worried allied commanders, who thought that the enemy might feed off this small success and muster another strong offensive.

However, the strength of the enemy troops was at a trough, not nearly as strong as it had been in the past. Despite the U.S. 1st Cavalry Division’s decision to leave the surrounding hills of Dabudong unprotected, they could not gather enough strength to attack from the hills.

Yeongcheon also faced danger in early September as the enemy seemed to succeed in punching a hole in the allied forces’ defensive line. But thanks to General Yu Jae-heung’s strategic planning and quick thinking, the ROK Army was able to recover the area in short time.

All that was left to do was to start our counter-attack.