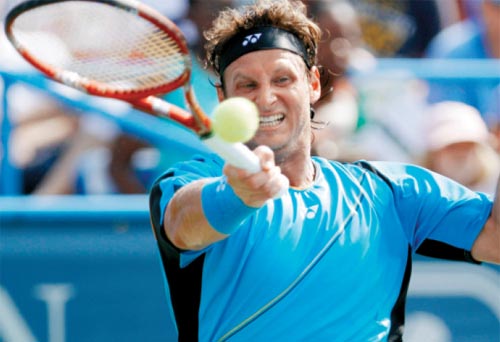 David Nalbandian, of Argentina, hits a forehand against Marcos Baghdatis, of Cyprus, at the Legg Mason Tennis Classic in Washington on Sunday. [AP]


WASHINGTON - David Nalbandian became the first player ranked outside the top 100 to win an ATP title in 2010, using his typically strong service returns and effective baseline game to beat No. 25 Marcos Baghdatis of Cyprus 6-2, 7-6 (4) on Sunday in the Legg Mason Classic final.

It’s the Argentine’s 11th career title, but his first on U.S. soil. He hadn’t entered a tournament since April, sidelined by a bad left hamstring. Before that, Nalbandian missed nearly 10 months starting in May 2009 because of hip surgery.

“I didn’t expect to win my first tournament,” Nalbandian said. “In the beginning, if I had to bet, I (wouldn’t have) bet on myself, of course.”

Turning to his support group during the on-court trophy ceremony, Nalbandian said: “We passed very, very tough moments during the year and a half that I was suffering my injuries and then my surgery.”

“We have to enjoy this moment,” he said, then added: “We have to keep going.”

Confident as Nalbandian is, he harbored some doubts about how he would play in this tournament.

After all, he’d missed about 12 of the past 15 months because of injuries. He hadn’t played in a tournament since April and he needed a wild-card invitation merely to get into the field.

A week later, he leaves as the hard-court tournament’s champion - and someone to watch at the U.S. Open.

Perhaps. But the 2002 Wimbledon runner-up is back on tour and back to giving opponents trouble, particularly with his returning.

He broke four of the first seven times Baghdatis served. “He’s putting a lot of pressure on the return,” said Baghdatis, who twisted his left ankle in the semifinals Saturday and said he felt pain early in the final.

Baghdatis had a chance to extend the match while leading 6-5 in the second set. He held a set point at 30-40 on Nalbandian’s serve, but put a forehand into the net on a 10-stroke exchange. Nalbandian eventually held serve there, then surged to a 5-0 lead in the tiebreaker.

Well, not quite: Baghdatis won the next three points. Plus, Nalbandian had problems with his serve throughout the second set - he faced 11 break points, although he saved all but two - and he hit his seventh double-fault of the day on his first match point. But Baghdatis then missed a forehand to end the match after 1 hour, 59 minutes.

Nalbandian has reached at least the semifinals five times at major championships, and was ranked as high as No. 3. But all of the recent time off, including skipping the past six Grand Slam tournaments, contributed to a slide down the rankings that dropped him to 161st.

He’s climbing his way up and expected to return to the top 50. The unseeded Nalbandian was impressive all week, winning 12 of 13 sets while upsetting four seeded players: No. 4 Marin Cilic, No. 7 Stanislas Wawrinka, No. 13 Gilles Simon, and No. 8 Baghdatis, who lost to Roger Federer in the 2006 Australian Open final.