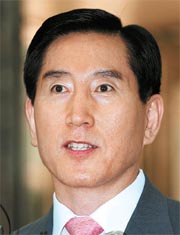 Shortly after a massive cabinet shake-up on Sunday, President Lee Myung-bak picked Cho to succeed Kang Hee-rak, who stepped down last week after a series of embarrassing cases of police bungling.

Following the nomination, the police personnel appointment committee met yesterday and gave its formal support to Cho’s nomination as the new commissioner general of the National Police Agency.

The National Assembly will hold a confirmation hearing to finalize the appointment. “I feel a heavy responsibility,” Cho told reporters after the police leadership upheld his designation.

He pledged to carry out police reforms, citing demands of the people.

Cho, 55, was named the Seoul police chief in January in a high-level police reorganization. He has been highly praised for having safely managed rallies and demonstrations while heading the Gyeonggi police. He commanded Gyeonggi police forces as hundreds of unionized workers occupied a Ssangyong Motor factory in Pyeongtaek for 77 days last year.

Cho passed the foreign service examination to become a diplomat in 1979. He later joined the police agency and served in various posts, including head of the security and foreign affairs divisions at the National Police Agency. He is a Busan native and a Korea University graduate.

Expectations are high for Cho after his predecessor, Kang, stepped down after just 16 months, following a series of police blunders that fueled public outrage over mismanagement and abuse of power.

Cho, who headed the Seoul Metropolitan Police Agency, is not free of police bungling either. Last month, five police officers at the Yangcheon police precinct in western Seoul were indicted on charges of torturing at least 22 people suspected of petty crimes to force confessions. In June, Cho faced calls to resign by his subordinates, who complained about his method of operating the Seoul police. The merit-based promotion policy for police officers was criticized by Chae Soo-chang, senior superintendent of the Seoul Gangbuk police precinct.

At the time, Cho defended his system and compared Chae’s argument to “dumping cold water” on efforts to “uplift police morale.” The controversy surrounding the merit-based promotion system is an issue that needs to be resolved, police insiders said yesterday.