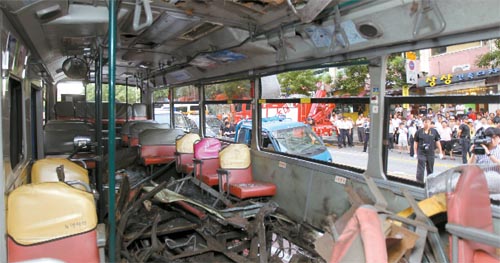 The intra-city bus #241B exploded near Haengdang station in Seongdong district, Seoul yesterday around 4:55 p.m. The police speculate that the compressed natural gas in one of its seven tanks at the bottom of the bus exploded due to the heat wave. 17 passengers and pedestrians were injured. [Yonhap]

Police and fire officials speculate that one of the seven gas tanks in the bus exploded due to the heat wave.

A female passenger, 27, who was sitting right above the gas tank that exploded, lost both her feet. Twelve bus passengers and five pedestrians were among those injured. Cars that were driving near the bus at the time of the explosion were also damaged.

“I heard an explosive blast and saw smoke shooting from the bus,” said a witness, surnamed Son. “I saw a woman with a serious injury to her ankle and the driver, who was covered in debris and walked out of the bus.”

Other witnesses added that windows of nearby buildings also shattered due to the shock from the explosion. Fifteen fire trucks and more than 70 policemen hurried to the scene and rushed the injured to Hanyang University Medical Center, Soonchunhyang University Hospital and Seoul Micro Hospital.

According to the police, the number 241B route bus was on its way to Muhak Middle School, waiting for the light to change in front of exit 4 of Haengdang station, when it exploded. The bus was towed away around 6:35 p.m. and the police are investigating the exact cause of the explosion.

Compressed natural gas buses began entering service in Seoul in 2000 as part of an environmental push, with 7,300 out of 7,558 Seoul buses now running on CNG. It was fifth time that a CNG bus had suffered an explosion.