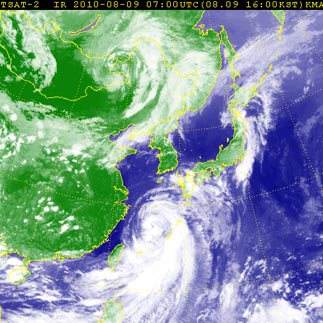 Typhoon No. 4, named Dianmu, is moving north toward the Korean Peninsula and is expected to hit Jeju Island today.

Heavy rain and high winds are expected on Jeju Island today, and the typhoon will shift toward the East Sea and the southern part of Korea tomorrow.

Typhoon Dianmu, first developed in China, refers to the goddess of lightning and thunder.

“A weak tropical low pressure system from southeast of Taiwan developed into a typhoon on Sunday,” the Korea Meteorological Administration said yesterday.

Typhoon Dianmu was moving north from 470 kilometers (292 miles) east-northeast of Taipei, Taiwan, at a speed of 26 kilometers per hour as of 3 p.m. yesterday. The central pressure of the typhoon was 985 hectopascals and the central maximum wind speed was 27 meters per second. The typhoon is regarded as small scale, with medium strength.

“Dianmu has a low possibility of becoming a large-scale typhoon and it will have a relatively small impact on the central district, but strong wind is expected in the eastern coast and southern part of Korea.” said Shin Ki-chang, a KMA weatherman.