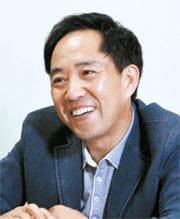 The International Baseball Federation announced early last month the 2012 World Junior Baseball Championship will be held in Seoul. Since the inaugural tournament in 1981, Korea has won five titles - the second most after Cuba, which has won a total of 11 - but this will be the first time the tourney is held in Korea.

The JoongAng Ilbo sat down with Korea Baseball Association President Kang Seung-kyoo to talk about the current state of amateur baseball in Korea and the significance of hosting the world junior tournament.


Q. You mentioned that there is good news concerning baseball in Korea. Care to elaborate?

A. We are currently working on a new corporate-sponsored semi-professional baseball league.

What is the significance of hosting the 2012 World Junior Baseball Championship?

The decision to host the 2012 World Junior Baseball Championship is part of this effort. It’s significant that Korea has been tapped to take part and lead the changes taking place in amateur baseball on an international level.

The KBA has decided to push for weekend leagues to encourage student-athletes to focus on their studies. This is a positive step, but will this change affect the quality of amateur baseball?

In the initial stages, that might be the case. But the current system has reached its limit.

Are there enough baseball fields to operate a weekend league?

It will be difficult to attract investors for new baseball fields in the immediate future. Even if it’s difficult, we need to initiate the project and solve problems that arise as we move along. If the KBA takes initiative, the government and those interested in the sport of baseball will support us.

We need a system in place in which athletes can receive quality education with the option of turning pro.

Isn’t it true that amateur baseball has continued with the support and sacrifice of parents, rather than the government?

When we start the weekend league system and amateur baseball becomes a club sport, parents will no longer be responsible for the financial burden.

The costs of entering a recent international tournament was covered by a university team. Can you describe ways in which your association plans to expand its finances?

There is a limit to raising funds through marketing. We need to increase the amount of funding we receive.

We currently receive funding from Sports Toto, a lottery gaming corporation, through the help of the Korea Baseball Organization. We also receive some financial support from the Ministry of Culture, Sports and Tourism, but the amount is too low at this point. We’re looking into marketing efforts with regional governments and corporations.

There’s been an increase in direct contact between overseas scouts and amateur players. The KBO and its teams are not happy about the trend. What solution can you offer for the problem?

It’s not an ideal situation for scouts to come in direct contact with players. To my knowledge, scouts cannot contact amateur players during the school year. Players have the right to seek opportunities to play abroad, but if it interferes with schoolwork, it’s a problem. We’re currently looking into ways to prevent signings and double contracts during the season.

There are countless cases of corruption and bribery in the amateur ranks. How will you deal with this problem?

We have a new rule wherein an umpire who is found to be corrupt loses his or her status without a warning. They have no chance for reinstatement. We will push for the same rules for managers and coaches.

In the past, there were light punishments. Can we expect something different in the future?

I stand by my words. If the punishments prove to be too light, I will take full responsibility.