A new wing for Joseon-era artifacts

A new wing for Joseon-era artifacts 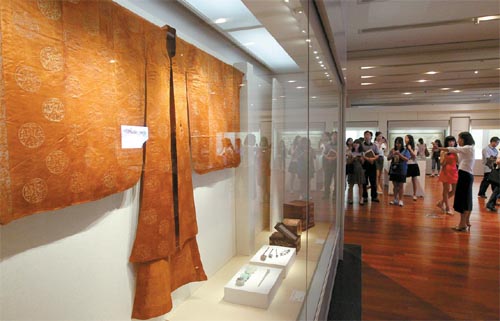 A court dress worn by Princess Cheon-gyeon from 19th century Joseon is displayed at the opening of the new Joseon wing of the National Museum of Korea in central Seoul on Thursday. [YONHAP]


The National Museum of Korea opened its new Joseon wing last Thursday, marking the end of the museum’s year-long transformation. It now has historical items in more specific groupings in an effort to make its materials more accessible to visitors.

Before the changes, items were displayed in three main galleries: the Asia, Art and Ancient History galleries. Beginning last year, the museum recategorized the wings into chronological order and opened the Goryeo and the Gojoseon wings.

“We have finally changed the permanent exhibition wings from ‘organizer-oriented’ to ‘audience-oriented,’ allowing visitors to witness the whole span of Korean history and connect each gallery to another in context,” said Choe Kwang-shik, director of the National Museum of Korea on Thursday during an event celebrating the opening of the Joseon wing.

The new wing has five rooms displaying 1,100 artifacts, including calligraphy, sculptures, paintings, pottery and everyday items like dishes, clothes and accessories, all from the Joseon Dynasty (1392-1910).

Room 1 features artifacts from the early Joseon era, which laid the foundation for the dynasty’s advances in science and culture, including the creation of Hangul during King Sejong’s reign. Room 2 has cultural artifacts from Joseon’s intellectual community as well as from its relationships with neighboring countries. This section includes weapons found during the Japanese and Manchu invasions and government texts documenting the kingdom’s political changes as its king and bureaucrats rebuilt the country.

Joseon’s evolving political order, social system and post-war traditions can be seen in Room 3. The development of silhak, the Confucian social reform movement that came on the heels of neo-Confucianism, is featured in Room 4.

Meanwhile, Room 5 showcases historical items showing Joseon’s efforts to modernize and establish itself as an independent country. Highlights include the manuscript of the Hunminjeongeum, or the script for Korea’s first alphabet, calligraphy by legendary Korean calligrapher Han Ho from the 16th century, the wartime journal of Admiral Yi Sun-shin and an armillary clock, honcheon sigye, built by Song Yi-yeong in 1669. This unique clock, built within a wooden cabinet, includes an armillary sphere and two pendulums and is designated a national treasure.

“This clock is one of the most distinctive clocks of this era in the world and combines Western and Eastern ways to measure time,” said Lee Hyo-jong, the main curator for this wing.

Also, a famous letter from 16th century Korea written by a woman who called herself “Won’s mom” and sent to her deceased husband is featured in the new Joseon wing, along with a shoe made with her hair. This is the first time that the shoe and the letter have been displayed here, after moving from the Andong National University Museum in Andong, North Gyeongsang.

The Gwansangam rain gauge, which was used to measure rainfall and is designated a national treasure, is also featured in the wing - the first time that the granite gauge has been put on display. It was previously stored at the Korea Meteorological Administration.

“The Joseon era is the part of Korean history that is the closest to our modern day life,” said Choe. “Through the items displayed here [in the Joseon wing], the public will get a chance to reinterpret Joseon history for themselves and find out about things that they haven’t come across in school books.”