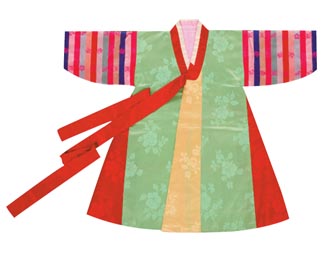 A book chronicling Korean dress and fashion in the early modern era was published last week, including a rare overview on the apparel and personal belongings of the last princess of the Joseon Dynasty.

The book, published by the National Research Institute of Cultural Heritage, covers about 200 pieces that Koreans wore from the late 19th to the mid-20th century, which are now owned by and displayed at Bunka Gakuen Costume Museum in Japan, the institute said in a press release.

It features some 50 pieces of clothing and personal belongings worn by Princess Deokhye, the youngest daughter of Emperor Gojong of the Joseon Dynasty (1392-1910) who lived a tragic life during the waning years of Korea’s last monarchy.

Deokhye, born in 1912, two years after Korea was annexed by Japan, was taken to Japan with her brothers and was forced to marry Japanese Count So Takeyuki at age 19.

After Japan’s defeat in World War II in 1945, the couple faced economic difficulties and Deokhye suffered mental problems. She was sent to a mental hospital, and her husband divorced her in 1953.

The princess returned to Korea at the invitation of the Seoul government in 1962 and led an isolated life at Changdeok Palace until her death in 1989.

The institute said Deokhye’s belongings had been donated by her half-brother and Korea’s last crown prince, Yeongchin, to the Bunka Gakuen school.

Her clothing presented in the book includes official ensembles of traditional Korean clothing called hanbok, pants, a dressing table, a pair of silver spoons and a gilded spoon pocket.

The book also introduces dresses and accessories Koreans wore in the early modern times under the nascent influence of Western civilization, such as earrings and a pair of high heels patterned after the colorful Korean jacket for hanbok.

Exhibitions and books about the ill-fated royal family of the Joseon Dynasty are attracting greater attention as this year is the 100th anniversary of Japan’s annexation of Korea.

For example, a historical novel “Princess Deokhye,” by Kwon Bi-young, was the No. 1 best seller in the first half of this year, according to Kyobo Bookstore, the nation’s biggest bookstore. It still remains on various bookstores’ best-seller lists.