Whimsical art teaches multiculturalism in the land of Oz

Whimsical art teaches multiculturalism in the land of Oz 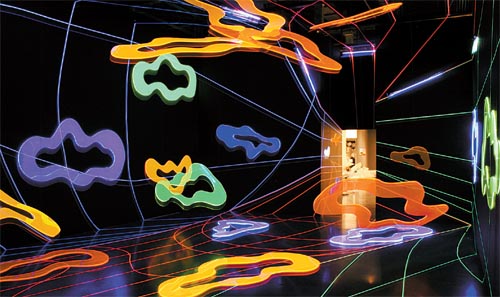 Demographically, Oz was a multicultural society, with creatures of various kinds living in harmony.

Like Dorothy, visitors to the exhibition “Over the Rainbow I and II,” whose title was inspired by the song from the 1939 musical “The Wizard of Oz,” at the Sungkok Art Museum in Jongno District, central Seoul, are invited to explore a fantastic new land while learning about the concept of multiethnicity.

Over the Rainbow I features works that introduce viewers to unfamiliar forms and cultures. Over the Rainbow II offers artworks and performances that blend the cultures of India, China, Mongolia and the Philippines.

“Although Korea has prided itself on its racial purity since its foundation, it must now open itself up to the global melting pot of international cultures,” Kim In-sook, president of Sungkok Museum, told reporters at a recent press tour with several of the participating artists. “It is still early for Koreans to anticipate having a leader like Obama, the Indonesia-educated African American president of the predominantly white United States. However, it is not too late to imagine two children of different colors holding hands on their way to school, as Martin Luther King did in his 1963 ‘I Have a Dream’ speech.”

In the first exhibition room, viewers are greeted by a strange sculpture of a “rabbit” that looks more like a D.J., with antennas protruding out of its head. In this installation, Kim Tae-joong’s seemingly never-ending lines recall the scribbles of Cy Twombly, a contemporary American artist. The painting’s cartoonish figures also evoke images of Hindu statues.

In the adjoining room, called “Dr. Autopoiesis’ Lab,” artist Kim Dong-hyun’s ideas about feminism are expressed through playful figurines and visual projections. In one part of the room, there are Transformers-like figures made of Legos, which Kim referred to as “the real image of women.” Nearby, pigtailed dolls sit woefully in a cage. The walls are decorated with the formula H=MW², a play on Einstein’s mass-energy equivalence equation, meaning that “a human being consists of a man’s attributes and double the proportion of a woman’s,” according to the artist.

In section three, four artists calling themselves Yeop, which means “sideways” in Korean, play with the illusion of two- and three-dimensional space. Their piece is a projection of the monochromic interior of a Chinatown inn. 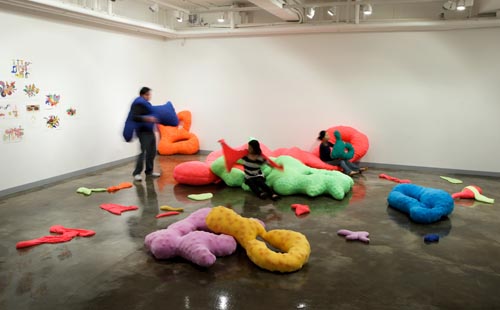 “Environment Sculptural” by Lim Ji-hyun, above, and “Wormhole” by Na In-ju, top, are part of the “Over the Rainbow I” exhibit going on until Nov. 7 at the Sungkok Art Museum in central Seoul. Provided by the museum


In the second exhibition hall, black lights by Na In-joo, patterned after the latitudes and longitudes of a cut-out globe, interweave around the four walls, creating the sense that the room is breathing. In the center of the room is a computer monitor, created by Choi Seung-joon, which viewers can use to search for the wizard of Oz. When the viewer sits in front of the computer, an image of the viewer’s face is projected onto the wall and is then fused with the faces of previous viewers to form an amalgamated portrait. The artist said that this shows that Oz can be anyone - regardless of gender, age or ethnicity - and that Oz is essentially oneself, containing many selves within.

The next work consists of five wooden stools that respond to pressure. When the viewer sits, a pair of digital images of mosaic chairs simultaneously light up and play a distinctive melody. When all of the chairs are occupied, a beautiful symphony can be heard. In this piece, Jeon Ga-young’s message is clear: Music is a universal language that becomes richer with more participants.

In the third exhibition room, artist Kim Kyung-ah presents a photo album of herself with “Amu,” a huge, huggable white doll with no features sans two blots for eyes. Amu means anybody in Korean. Looking at the two amorphous dolls in the room, viewers have an opportunity to communicate with their inner selves, the artist said.

The final exhibit was constructed by artist Kim Young-hyeon. Two projectors at each end of the installation show two images - a breezy seaside reconstructed from the artist’s memory and a virtual mountain slope from the game Avatar - that combine to form a single striking image projected onto an installation constructed of five white square panels lined up in a row in the center of the room.

The Over the Rainbow II exhibition in the next building offers more interactive experiences, including a waltz class, a temporary tattoo session and a spice room. These activities have been organized by Salad Theater for Multi-Culti Performing Arts, which is composed of marriage migrants hoping to bridge the gap between Korea’s minority population and native Koreans through art.

Once a week, the group presents a show called “Space Manhol_e_ssay,” which depicts the creation of a global society.

Over the Rainbow I and II awakens one’s senses, challenges prejudices and deepens self-awareness. Most importantly, it will encourage viewers to reflect upon the immigrant cultures of Korea in a dynamic new way.