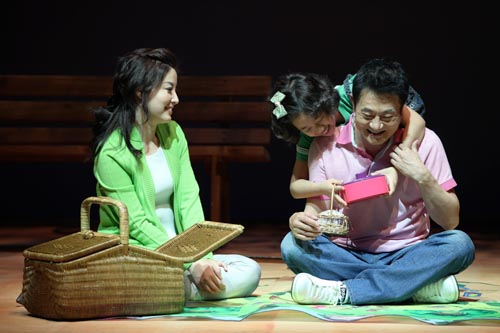 Park Jun-kyu, left, and Oh Jung-hae play a happily married couple and Ju Ji-won plays their child in “Thank You, Honey,” which analyzes the meaning of family and domestic love. It is being performed at Dongguk University through Aug. 21. See THEATER, below. Provided by Asia Bridge Contents

Tuesday: This is the first chamber orchestra concert produced by the Silk Road Foundation, which targets cultural exchange between countries in Central Asia and Korea. Young artists from Russia, Kazakhstan, Uzbekistan, Azerbaijan and Korea will perform together in the name of overcoming national and cultural borders.

Aug. 21: This concert for young people features songs on the theme of dreaming. Guest artists include pop diva Insooni, known for her hit song “Dreaming of Geese”; Jung Sung-ha, who first appeared on the SBS-TV program “Star King”; and the renowned Korean B-boy group Rivers Crew.

Aug. 28: Baritone Seo Jung-hack became a world-renowned artist after he won an award from the Metropolitan Opera National Council in 1996. He debuted with the San Francisco Opera in 1993, which made him the first Asian singer to win the Schwabache Family Award.

Aug. 29: Lee Sung-ju, the music director of “Joy of Strings,” a violinist and a professor at the Korea National University of Arts, formed a chamber orchestra with her students in 1997. They perform a diverse program of classical favorites.

Through Aug. 18: This concert will feature songs from some of Korea’s favorite dramas, including “Winter Sonata,” “Boys Over Flowers,” “My Name is Kim Sam-soon,” “I’m Sorry I Love You,” “Iris” and “Stairway to Heaven.” Guests include Kim Bum-soo, Byul, SG Wannabe, Clazziqui and T-Max.

Through Aug. 20: This nationwide high school students’ festival, which started in 1997, is held to educate students about literature and the performing arts, and to encourage them to be more creative. The guest artists are students from Choo-oh College’s Suginami High School in Tokyo.

Through Aug. 21: This play analyzes the meaning of family and domestic love, as seen through the eyes of a married couple. Mi-young, a mother and college professor who has been married for 10 years to Jun-soo, a former business entrepreneur who spent all the family’s money to start a business and is now a prospective lawyer who is also a stay-at-home husband studying law full time.

Aug. 6 to Aug. 22: This play tells the story of a family that lives in a frequently war-torn country. On the day a peace agreement is to be announced, the family is deeply disappointed since they were secretly in the process of building a private air-raid shelter that they were going to open to the public once the war began. The story unfolds as the family tries to keep their shelter safe.

Performances start at 8 p.m. on weekdays, at 4 and 7 p.m. on Saturdays and at 4 p.m. on Sundays. There are no performances on Mondays.

Aug. 25 to 31: This play by William Shakespeare depicts friendship, broken trust and materialism in capitalist societies. Here, Shakespeare sharply criticizes the downfall of humanity, which is a very different theme from his other well-known plays. The play gained even more attention when it became known that Karl Marx studied it and quoted lines from the play in his arguments denouncing capitalism.

Aug. 25: Kang Sue-jin of the Stuttgart Ballet and Soe Hee of the American Ballet Theater will perform alongside others, accompanied by music played by the Prime Philharmonic Orchestra.

Aug. 26 to 27: To commemorate the 30th anniversary of the founding of the Korean Ballet Association, Dancers from the Mariinsky Ballet from Russia will perform with Korean dancers.

On the first day, Anastasila Matviienko and Denus Matviienko of the Mariinsky Ballet will perform “Don Quixote.” On the second day, rising ballet star Park Se-eun and Kim Ki-min of the Korea National University of Arts will perform the same roles.

Through Aug. 21: This is a play about a child named Haneul who lives in a small country town and who discovers just how much his parents love him. Haneul, who was raised by a mom whose handicapped leg makes it difficult for her to walk, always blamed his mother for making him a laughingstock among his friends. One day, he tries to trade his mom’s diary for some Korean style taffy called yeot until a group of mischievous children in town steal the diary away from him. As he starts his journey to reclaim the diary, Haneul learns that a large fire that happened when he was young took his father’s life and injured his mother’s leg as they tried to save him, and he returns to build a new relationship with his mom.

The performance starts at 2 p.m. and is presented on Thursdays, Fridays and Saturdays.

From Seoul, take the Samaeul train from Seoul Station to Youngdong Station

This event brings the world’s best bodypainting artists to Korea. Activities include a fantasy makeup contest, a bodypainting contest, music and dance performances, magic shows and exhibitions. Visitors will be able to receive free services such as face painting and nail art. A spectacular fireworks show will add to the celebratory mood at the festival.

From Seoul, take the KTX train from Seoul Station to Daegu.