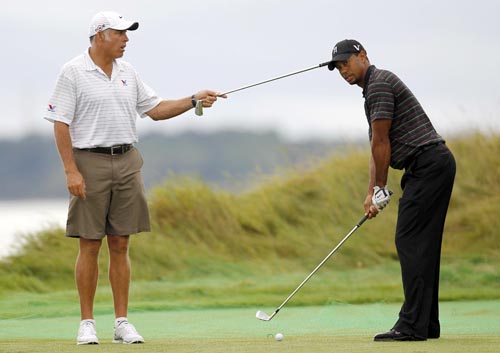 Tiger Woods, right, of the United States, hits the ball as his caddie, Steve Williams, holds a club on the seventh tee during a practice round for the 92nd PGA Golf Championship at Whistling Straits in Wisconsin, on Monday. [REUTERS]


KOHLER, Wisconsin - If any extra proof is needed that this week’s U.S. PGA Championship at Whistling Straits is wide open for the taking, then look no further than the winners of the last two majors.

With Tiger Woods a shadow of his former dominant self, Britain’s Graeme McDowell made his major breakthrough in the U.S. Open at Pebble Beach and South African Louis Oosthuizen followed suit in last month’s British Open at St. Andrews.

Professional golf has never enjoyed greater strength in depth and, with top-ranked Woods immersed in one of the biggest slumps of his career, unpredictability is once again sure to be the keyword at Whistling Straits.

Add to that the struggles of world No. 2 and 2005 PGA champion Phil Mickelson in the final round of the WGC-Bridgestone Invitational on Sunday, and you have the recipe for intriguing results at the year’s final major.

“Nobody is quite dominating at the moment, and that means two things,” 2008 PGA champion Padraig Harrington told reporters at Firestone last week. “One, players aren’t scared, and two, there’s more of them to win.

“When you have one player dominating and winning consistently, very few people are gaining confidence. If anything, it’s going to work in the opposite way.”

Woods, comfortably the leading player of his generation and a 14-time major winner, has not triumphed on the PGA Tour since the BMW Championship last September.

Although he has clinched the PGA Championship four times, most recently in 2007, even his strongest backers will feel wary this week based on his fluctuating fortunes this season.

Since he became embroiled in scandal following revelations about his serial philandering at the end of last year, he has lost the aura of invincibility he once held over his rivals.

Winless in eight starts on the 2010 PGA Tour, Woods plunged to new depths at Firestone last week when he produced his worst ever finish on the U.S. circuit.

A closing 77 left him tied for second-to-last in the 80-player field, raising questions over his mental state going into Whistling Straits with a divorce reportedly imminent.

“[I’m] just not playing well,” Woods said stone-faced after producing his highest 72-hole aggregate on the PGA Tour and his worst relative to par. “It’s been a long year.”

Left-hander Mickelson fared even worse on Sunday, battling to 78 when a strong finish would have helped him claim the world number one ranking for the first time.

These are certainly very interesting and unpredictable times in professional golf.

Ninety-seven of the world’s top 100 players will be assembled at Whistling Straits for tomorrow’s opening round, and you can bet that at least a handful will go on to deliver performances of a lifetime.

“Everybody out here has the ability to put it together for a week, and when that week comes around, they can be unbeatable,” said Britain’s Justin Rose, a double winner on the PGA Tour this year. “The strength and depth now is very, very strong. Guys like Louis Oosthuizen, I’ve played with him a few times and you’re always staggered by how well he swings it, how well he hits the ball.”

Remarkably, there have been five first-time winners in the last six majors,