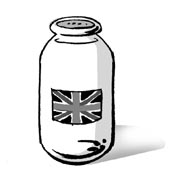 Winston Churchill is known as “the missionary of milk” in Korea. In 1940, when World War II was in full swing, he said that “in any society, there is no greater investment than letting children drink milk.” The remark eventually became part of an ad for a milk company.

At the time, the British economy was hit hard after the German bombings, and the streets were overflowing with children seeking refuge after being separated from their parents. The children’s clothes were in tatters. Recognizing that the growth of children was directly connected to the nation’s future, the Churchill cabinet decided in 1944 to provide a daily 189 milliliters (0.8 cups) of milk for each student for free.

But when the cost began to burden the government, Margaret Thatcher, when she was education minister in the 1970s, cut off free milk for students in higher grades. Her actions resulted in criticism from citizens who called her the “milk snatcher.” Thatcher demanded a cure for what she said was Britain’s “welfare disease.” But even then, the country continued to provide free milk for children under the age of five through local governments.

Nowadays, the debate over milk has heated up again in Britain with news that the government is considering abandoning the free milk program next year. The government’s position is that too much money is being wasted on free milk for children. The cost for free milk in England alone amounts to around 50 million pounds ($79 million) a year. Although it is not a huge amount, the government wants to save every penny because of its serious budget deficit. Prime Minister David Cameron, who confronted strong criticism over the issue, was the first to take a step back.

In Korea, adults in their 40s and 50s feel nostalgic about milk. Beginning in September 1970, students were able to purchase milk for 16 won ($0.01) per 100 milliliter bottle. Food was scarce at the time, so children salivated upon hearing propaganda that said they would grow quickly if they drank milk. Times have changed, however, and now about half of the 7.47 million students in primary, middle and high schools buy milk at school to drink.

The controversy in Korea is not over milk, but over lunch. At a time when the government does not even provide milk for free, a proposal to provide schoolchildren with free lunches has drawn criticism.

In England, there was social turmoil over the idea that 500 million pounds would be spent on free milk. In Britain today, the generation that has grown up drinking free milk says it can no longer supply free milk to its offspring.

Meanwhile, politicians in Korea are promising free lunches to all schoolchildren, even if it costs trillions of won in tax money. We have an old saying here that goes “freebies are worth the trouble” - but I think we have to remember that there is no such thing as a free lunch.