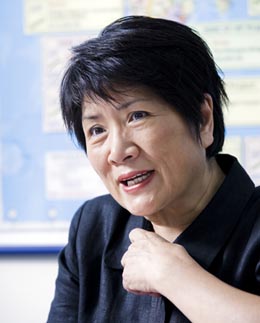 Ambassador Dho Young-shimChairwoman of the Board of Directors, UNWTO ST-EP Foundation

United Nations Secretary-General Ban Ki-moon announced a list of names last month with the aim of achieving one of the Millenium Development Goals of cutting world poverty in half by the end of 2015. The MDG project was originally launched in 2000 by UN member countries, and Ban appointed an advocacy group last month to spur the project to conduct a review of its past efforts and come up with plans for the future.

The list includes such prominent figures as Bill Gates, Ted Turner and Nobel Peace Prize winner Muhammad Yunus. Of the 16 names, one in particular should be familiar to Koreans: Ambassador Dho Young-shim, Chairwoman of the Board of Directors for the UNWTO Sustainable Tourism for Eliminating Poverty Foundation (UNWTO ST-EP). The foundation was established in 2003 by the United Nations World Tourism Organization, with its headquarters located in Da-dong, a neighborhood in the Jung district in central Seoul. Its main mission is combating poverty by developing tourism and education programs in Africa.


Q. What is your role as a member of the advisory group for the MDG project?

A. My main duty is supporting children’s elementary school education along with the queen of Qatar. The UNWTO ST-EP foundation has been pushing a project called “Thank You Small Library,” where we set up small libraries in African countries. I think the UN thinks highly of the project and that’s why I was appointed to one of the advisory groups. As a result of the Thank You Small Library project, we established 73 libraries with between 2,000 and 3,000 books each.

How will tourism eradicate poverty in Africa?

It is a good way to earn foreign currency, and tourism also creates many new job opportunities. Most developed nations were able to accumulate wealth by producing industrial goods, but that route is impossible for African countries. Instead, they have been given natural beauty and wild animals.

Give us some details on how you are developing tourism programs for African countries.

We help tourists visit folk villages in Africa. For instance, if the folk village is hard to access because it is surrounded by water, we build bridges to get there. If tourists buy souvenirs, it could change the village’s future. For those who live on less than $1 per day, $10 is a huge sum. We also offer microcredit loans for local people, especially women, who want to launch their own businesses. We lend 40 euros ($52.69) to each woman, and with that money they purchase raw materials to make crafts. After six months, we lend them more money if they pay back the original loan along with an interest payment of six percent.

Do you think these programs affect the daily life of Africans?

We try to empower local people. For example, we let locals decide important matters. When we build libraries, people in the region choose what books they will read. From a small child to the head of a clan, they have intense discussions over the list of books. By doing this, they become devoted to the library and are willing to maintain the facility. Every library also has a Korean corner where people can read Korean fairy tales.

Why do you think the UN chose you as the Chairwoman of the Board of Directors for the UNWTO ST-EP?

So many global organizations, developed countries and huge foundations already help poverty-stricken countries, but it takes a long time for aid from these organizations to reach the population of one billion people who live on less than $1 a day, the so-called “Bottom Billion.”

Instead of a top-down approach, the UN thought it needed a bottom-up approach, and I was the one who could do that.

Why did you go overseas to study?

I wanted to major in journalism but it was not that popular in Korea back in the 1960s. My parents didn’t want their daughter to study an insignificant subject, so we settled on a happy medium. I decided to study journalism at the University of Wisconsin.

Did you dream of being a journalist?

Jacqueline Kennedy was a journalist. It was fantastic to see her carrying a camera in one hand and a microphone in the other. Being like her was my dream, but I gave up because of my poor English. Back in high school, I always received top scores in my English classes in Korea, but I couldn’t understand what people were saying when I went to the United States. Even my professor suggested that I should do something other than journalism because of my poor English.

Wasn’t it difficult to study abroad at that time?

I was born rich because my father had a business of his own. I went to the U.S. in 1966, and on weekends, all the pretty girls went out on dates while I stayed in the dorm with the fat girls because of my poor English. So we used to order pizzas and watch TV on weekends. One weekend I saw a TV commercial that moved me because it showed a poor Korean woman begging for money in the middle of Gwanghwamun, with the narrator saying, “If you donate $1, you can change this person’s life.”

Now you are the one who gives a helping hand to these people.

I feel like it’s my destiny. Africa is a place where I could feel comfortable. When I had problems with my family about two years ago, I headed to Africa. If I go and see the people there, I can’t complain about my situation.

When you returned to Korea from the U.S. in the 1970s, you landed a job at the National Assembly Secretariat. Were you interested then in becoming a public official?

No. Around that time President Park Chung Hee received a lot of pressure from the U.S. Congress over human rights issues. Paik Too-chin, then a leader of the National Assembly, was looking for a person who spoke English to help justify why Korea needed an authoritarian system for its economic development. I was hired as a part-time employee, and I became a politician 10 years later.

What’s your secret to success?

In Korea, where school ties and regional ties are important, I had no one to rely on. I was born in Seoul, where my family’s surname Dho is very rare. If I had been born in Jeolla or North Gyeongsang, I would have had someone to rely on. I was also a woman who graduated from a foreign university, so I was marginalized. But I tried hard.

How do you manage to have so many friends in so many different areas?

If somebody asks me for help, I always try to give my all if I think they deserve it. The personal connection comes naturally.