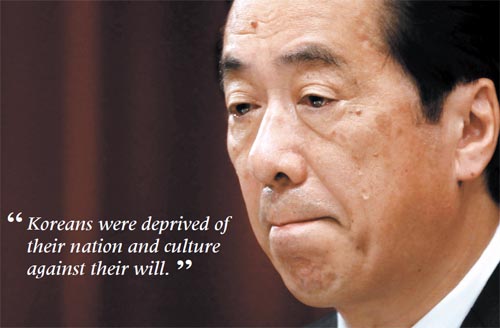 Japanese Prime Minister Naoto Kan attends a news conference at his official residence in Tokyo yesterday, where he apologized to Koreans for their suffering under Japan’s colonization of the peninsula. [REUTERS/YONHAP]


Japan yesterday made its first direct, official apology for its colonial rule of Korea, two weeks before the 100th anniversary of the treaty it used to annex the country, in an effort to alleviate tensions still caused by the legacy of that shameful period.

Japanese Prime Minister Naoto Kan read the apology, which was endorsed by the cabinet led by his centrist Democratic Party of Japan.

In the statement, Kan acknowledged that 35 years of colonial rule had been forced upon Korea against the will of its people, the first time a Japanese prime minister had made that admission. He also promised to return Korean cultural assets that had been moved to Japan, including Joseon Dynasty royal documents taken during colonial rule, to show Japan’s commitment to building a future-oriented bilateral relationship. “As shown in their acts of strong resistance, such as the March 1 Independent Movement, Koreans were deprived of their nation and culture by a colonial rule that was against their will,” Kan said.

It may be easy for the ones afflicting the pain to forget, but the victims remember, he said. Kan also expressed his “feelings of deep remorse and heartfelt apology for the tremendous damage and suffering brought on by colonial rule.”

On Aug. 15, 1995, then Prime Minister Tomiichi Murayama did offer an official apology for Japan’s aggression during World War II, but no official apology has ever been directed exclusively at Korea, the only country to be annexed by Japan.

The annexation treaty was signed on Aug. 22, 1910, and took effect on Aug. 29. The colonial period lasted until the end of World War II, on Aug. 15, 1945, which Koreans now celebrate as Liberation Day.

Kan said the two countries were approaching a turning point at which they could move past the bitter relationship of the last 100 years toward a forward-looking partnership for the next century.

Calling Korea Japan’s most important and closest neighbor, sharing with it the values of democracy, freedom and free markets, Kan said the two countries have much to contribute not only to each other but to East Asia and the whole world.

As a token of its commitment to a forward-looking relationship with Korea, Kan said Japan would soon return the royal documents that contain records of national and court ceremonies that took place during the Joseon Dynasty (1392-1910).The documents were taken by the Joseon Governor General’s Office, the highest Japanese authority during the colonial period, and have since been kept by Japan’s Imperial Household Agency in Tokyo. The Korean government welcomed the statement, saying it helped fulfill Japan’s promise to deal with its past wrongdoings honestly. “We hope all Japanese people share this perspective,” the Foreign Ministry said.

Political insiders in Korea called the statement a step forward from the previous apology issued by Prime Minister Murayama in 1995. That the Japanese government could issue such a statement despite the political difficulties now being experienced by the ruling DPJ is a sign Japan is serious about progress in the bilateral relationship.

Kan was attacked for the statement by several Japanese opposition politicians. Shinzo Abe, a former prime minister from the Liberal Democratic Party, which ruled Japan nearly uninterrupted for over 50 years until the DPJ defeated it in 2008, called the statement “imprudent.”

Takeo Hiranuma, leader of the Sunrise Party of Japan, formed by a group of LDP defectors, said the statement was unnecessarily self-flagellating and disregarded the opinions of Kan’s fellow politicians and the general public.

Hiranuma also warned that the statement would raise expectations in Korea of additional compensation from Japan for its actions during the colonial period.

Meanwhile, a few Korean politicians criticized the statement for not going far enough, and downplayed its potential to change the tone of Japan-Korea relations.

They pointed out that although it admitted the occupation was carried out against the will of the Korean people, Japan had still not admitted that it coerced Korea into signing the annexation treaty. If it did admit that the treaty was forced on Korea and not mutually agreed upon, the critics said, that might leave Japan open to liability for the damage it caused to Korean victims of colonial power. Nor did the apology mention the “comfort women” taken as sex slaves by the Japanese military during the occupation. “It was insufficient to assuage the public because there was no concrete mention of the illegality of the forced annexation or the forced mobilization of comfort women for Japanese soldiers,” said Ahn Hyoung-hwan, a spokesman for the ruling Grand National Party.

Jeon Hyeon-heui, spokeswoman for the major opposition Democratic Party, also demanded follow-up measures from Japan to compensate Korean victims. Others called the return of the artifacts a one-time event that would not help set the stage for the return of the many other pieces of Korea’s cultural heritage taken by Japan.