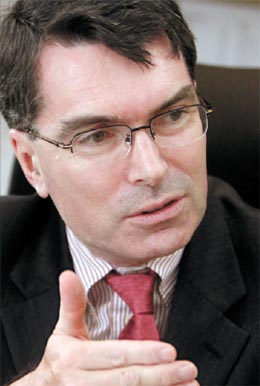 Great Britain wants Korea to lend a hand in imposing sanctions on Iran, and it is willing to help the Korean government with the procedures, the British ambassador to Korea said yesterday.

The British Embassy recently shared information with the Korean government regarding an Iranian bank suspected of aiding nuclear proliferation in Iran, according to another British diplomatic source who sat in on an exclusive interview with Ambassador Martin Uden by the JoongAng Daily and JoongAng Ilbo.

“We have been talking about the UN Security Council sanctions, about the U.K.’s own actions domestically for Bank Mellat, and about the implications to Seoul,” said the source.

Uden urged the Korean government to proceed with sanctions, because “[Korea’s] interest in the Middle East will be threatened if we see an escalation of tension there.”

Bank Mellat, which has been accused of illegal financial transactions to aid Iranian nuclear proliferation, currently operates a major branch in Seoul.

The U.S. has been pressuring the Korean government to close the branch, and local officials are still debating the matter. The UN announced new sanctions against Iran on July 9 for failing to comply with international nonproliferation obligations.

Emphasizing that there should be more pressure on Iran, the ambassador pointed out that previous sanctions have so far not had the desired effect.

“We don’t have any objection on Iran following a peaceful nuclear program, but there are suspicions,” said Uden. “I believe there’s more we should be doing. And it’s quite clear at the moment that the sanctions aren’t working.”

The ambassador showed distrust of Iran’s uranium enrichment program and said that “it should be under proper international safeguards under the [International Atomic Energy Agency].”

International news reports have indicated that Iran since February has been in possession of uranium enriched up to 20 percent, which can easily be turned into weapons-grade material.

Korea is in a tight spot with Iran, its main supplier of oil. Korea has no oil reserves of its own. Still, Uden said, if Korea were to lose its bilateral trade with the Middle Eastern country, which measures up to $10 billion a year, it would be incomparable to “what could happen further down the road.”

“I think if we were to allow Iran to go forward and develop a nuclear program, you’re really going to suffer,” said the ambassador. Uden said that Great Britain does not import oil from Iran. He said Britain’s bilateral trade with Iran has been about $632 million a year - with about $537 million of that going from Britain to Iran.

The British ambassador wanted to respond to a previous interview with the Iranian ambassador to Korea, Mohammad Reza Bakhtiari, because Uden believed “readers should have both sides of the story.” It has been rare for ambassadors in Korea to speak out against each other on a specific issue.

The Iranian ambassador warned in the interview that there would be economic consequences if Korea were to apply stricter sanctions.

“As an increasingly [significant] diplomatic member of the international community, and as host of the G-20,” Uden said, Korea should take a stronger stance in facing Iran.

“With strength comes responsibility,” Uden added. Because of the large trade relationship Korea has with Iran, the British ambassador feels if South Korea imposes sanctions, it would send a “potent message.”

“If the international community sends a really clear signal to Tehran, they will return to the negotiating table and we’ll take off the sanctions. That’s what we’re trying to do here,” he said.