How a treasure came to be returned

How a treasure came to be returned 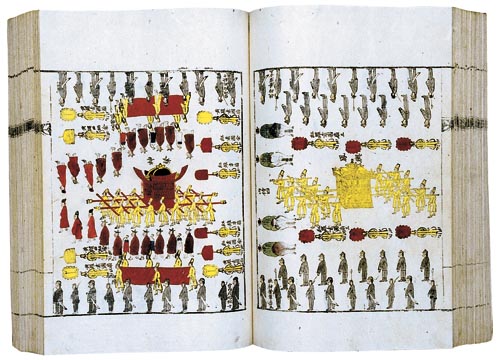 A photograph of the “Uigwe” volume that depicts the state funeral of Empress Myeongseong. The ancient Korean royal texts were found at the Imperial Household Agency in Tokyo. By Kim Hyun-ki


Japan’s promise to return a Joseon Dynasty treasures to Korea has become reality, thanks to behind-the-scenes diplomacy between the two countries, according to sources.

Japanese Prime Minister Naoto Kan made the promise yesterday as part of his apology for the colonial rule of Korea and as a token of the country’s wish to build a better relationship with Korea.

The signing of the annexation treaty starting the 35-year-long colonial rule by Japan of Korea marks its 100th anniversary on Aug. 22.

Diplomatic sources from the two countries said the return of the historic documents started with a request from the Korean government, made when Foreign Minister Yu Myung-hwan met his Japanese counterpart Katsuya Okada in February.

The Japanese government called the request nonsense at the time, arguing that the 1965 Treaty on Basic Relations between Korea and Japan had cleared up all historical issues between the two countries. The treaty was agreed to by the then-Korean military regime of Park Chung Hee in return for financial assistance.

But a change was felt in March.

The JoongAng Ilbo learned that books written during the Joseon Dynasty were stored at Japan’s Imperial Household Agency in Tokyo, and the newspaper later reported on it. Korean academics and civic groups began to push for the return of those cultural treasures.

Some Korean lawmakers also visited Japan, informing the Japanese government of a significant voice within Korea calling for return of the items.

Yukio Hatoyama, then-Japanese prime minister from the progressive Democratic Party of Japan, also pushed for return of the documents.

But when Naoto Kan took office, replacing Hatoyama in June, the Foreign Ministry of Japan struck back, opposing the return, saying it would encourage Korea to demand the return of even more cultural heritages.

According to the National Research Institute of Cultural Heritage, 61,409 cultural assets taken out of Korea are being exhibited at around 250 museums, college and temples in Japan.

But six DPJ members, including Eiko Ishige, visited the Imperial Household Agency to see the documents, appealing to Yoshito Sengoku, administrative reform minister, for their return. Seiichi Kondo, chief of the Agency for Cultural Affairs, who was former ambassador of Japan to Unesco, said returning the documents conforms to the spirit of Unesco.

Apart from the documents, some other cultural heritages kept at the agency will also be returned, according to observers. The statement involves some cultural assets, not just the documents.

Park Sang-kuk, head of the Korea Cultural Heritage Institute, said that it will likely include Jesil Books and Gyeongyeon.

Jesil Books, designated as tangible cultural properties, are the books introducing medicine, customs and military system during the Joseon Dynasty. Gyeongyeon are the educational books for kings.

Some observers said the return will be made in November around the time when President Lee Myung-bak participates in an Asia-Pacific Economic Cooperation meeting in Yokohama.