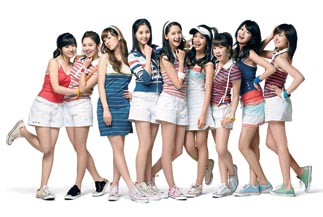 Girls’ Generation will make its debut in Japan on Sept. 8. The nine-member female idol group will release three different versions of the song “Genie” in its newest market.

“With only a month left to go until the group’s debut in Japan, we are actively promoting the band,” SM Entertainment said in a release.

Along with Girls’ Generation, other K-pop groups are making their way into the Japanese music scene, including Kara and Big Bang.