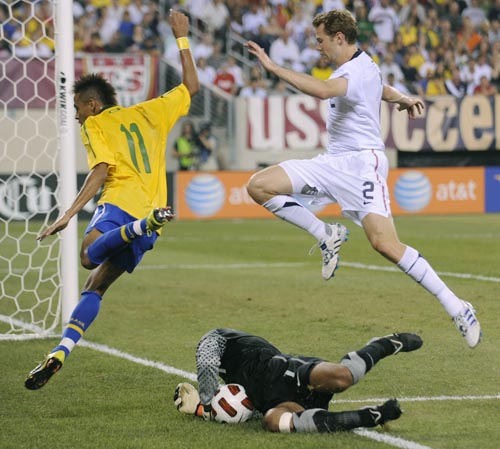 U.S. goalkeeper Tim Howard makes a save as Brazil forward Neymar, left, and U.S. defender Jonathan Spector, right, jump over him during the first half of an international friendly match Tuesday. [AP]


EAST RUTHERFORD, New Jersey - Neymar scored in his debut and Alexandre Pato added a goal late in the first half as Brazil beat the United States 2-0 in an international friendly Tuesday, the first match for both nations since their disappointing World Cup exits.

Neymar, the 18-year-old Santos sensation, had just switched with Robinho and moved from the left flank to the center. He beat Jonathan Bornstein to an Andre Santos cross and angled a header inside Tim Howard’s left post in the 29th minute.

Pato doubled the lead in first-half stoppage time when Ramires’ pass split defenders Bornstein and Carlos Bocanegra, and the 20-year-old AC Milan forward shot past Howard. It was his second goal in nine appearances and first since his debut against Sweden in March 2008.

“They put you in such difficult spots defensively,” Bocanegra said. “I made the decision to step, and probably should have went the other way and maybe tried to run back.”

Both Pato and Neymar were overlooked by Dunga on his World Cup roster despite public clamor for their selection in Brazil.

Dunga was fired after the 2-1 World Cup quarterfinal loss to the Netherlands last month and replaced by Mano Menezes, who promised to restore the “Jogo Bonito” - “beautiful game” - as Brazil prepares to host the World Cup in 2014.

Menezes replaced the dour defensive tactics of Dunga with an attack-minded 4-3-3 formation, with Pato between Neymar on the left and new Brazil captain Robinho on the right.

“That’s the line that we will establish from now on,” Menezes said through a translator.

A near-sellout crowd of 77,223 attended the high-profile homecoming for a U.S. team that drew record television ratings during the World Cup.

With young, swift players, Brazil showed glimpses of the renowned ball movement that took a back seat in South Africa to a more defensive game. Brazil won for the 15th time in 16 matches against the U.S. and has outscored the Americans 31-10.

“If we’re going to get to the next level, we’ve still got to be a lot better,” American star Landon Donovan said.

Ganso, Victor and defender David Luiz also made their international debuts for Brazil, along with substitutes Andre, Ederson and Jucilei.

“Everyone was very comfortable playing together,” Neymar told Brazilian media. “Mano gave us a lot of freedom to do what we always do on the field, and that helped a lot. That’s why we were able to play so well.”

U.S. coach Bob Bradley had nothing but praise for Neymar. “His ability to go at people and create on the dribble is something that I think is special,” he said. “I think everyone knows the talent that Brazil possesses.”

For both nations, rebuilding began in a gleaming $1.6 billion stadium in New Jersey, which is set to host its first official NFL games next month.

Criticized for some of his lineups during the 2-1 overtime loss to Ghana in the World Cup’s second round, Bradley made six changes from the starting 11.

The coach used Maurice Edu in midfield in place of Ricardo Clark, and started Benny Feilhaber and 23-year-old Alejandro Bedoya in the midfield instead of Landon Donovan, who moved up to forward, and Clint Dempsey, who remained in England with Fulham ahead of the Premier League opener.

“A very young team we had tonight, as well as them,” Donovan said. “But from an experience standpoint, they had a lot of guys that have played in a lot of big games and we haven’t, and I think that showed through.”

MLS scoring leader Edson Buddle started up front in place of Robbie Findley, who was ineffective in South Africa.

Omar Gonzalez made his international debut at center defender in place of Oguchi Onyewu.

Bradley may have been overseeing his last match as U.S. coach. His contract expires in December, and it’s not certain whether the U.S. Soccer Federation will choose to retain him. Before Bradley was hired four years ago, former Germany coach Juergen Klinsmann withdrew from consideration.

“It was agreed after this game there would be some more discussions and we will see where those discussions go,” Bradley said.