Will a leader emerge from shuffle?

Will a leader emerge from shuffle? 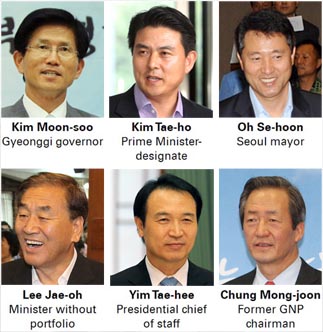 “For the Grand National Party to win the next presidential election, competition is the key,” said a confidante of President Lee Myung-bak. “All the potential candidates should be thrown into a furnace [to make them] tough.”

Lee’s recent cabinet and Blue House shake-ups are seen as a move to find a potential presidential candidate.

On Sunday, Lee named former South Gyeongsang Governor Kim Tae-ho as prime minister and Rep. Lee Jae-oh, a senior member of the pro-Lee faction, as the minister without portfolio.

The president also appointed Yim Tae-hee, a three-term GNP lawmaker and a key Lee ally, as his chief of staff last month in the Blue House overhaul.

In the aftermath of the GNP’s crushing defeat in the June local elections, Lee said he wanted to make a generational change in his team. Following the reshuffle, 47-year-old Kim and 53-year-old Yim are now seen as potential candidates in the race to become the GNP’s next presidential candidate.

While Lee Jae-oh, 65, is considered a figure of the older generation, President Lee also opened the door for him to have significant influence in political affairs.

The presidential nomination competition includes Park Geun-hye, former chairwoman of the party who lost to Lee in the 2007 presidential primary and long seen as the frontrunner, and several members of the pro-Lee GNP faction who have vowed to stop her rise.

In addition to the three newly appointed aides, Gyeonggi Governor Kim Moon-soo, Seoul Mayor Oh Se-hoon and former GNP Chairman Chung Mong-jun are considered to round out the “six sleeping dragons” of the pro-Lee faction.

“President Lee has long believed that fierce internal competition is key to finding a strong candidate to win the next presidential election,” said the senior Lee aide. “That’s the idea behind Lee’s appointment of Prime Minister Chung Un-chan in September last year, as well as the reshuffling of the Blue House and the cabinet.”

One of the president’s key strategists said the situation in the Democratic Party is similar to that of the GNP, with many hopefuls competing to head the DP ticket in 2012 in the absence of a clear leader. Chung Sye-kyun, Sohn Hak-kyu, Chung Dong-young, Kim Du-kwan, Lee Kwang-jae, An Hee-jung and Rhyu Si-min are all considered to be potential presidential candidates.

Lee’s idea of encouraging internal competition clearly disturbs the pro-Park faction, which called the latest cabinet reshuffle an overt attempt to stop Park’s presidential ambition. “Now, Park is being pushed out,” said a pro-Park lawmaker. “What Lee is doing is trying to hem Park in.”

Another Park loyalist said Lee’s intention is to find the strongest pro-Lee politician to challenge Park.

Rep. Hyun Ki-hwan, a Park supporter, said a planned meeting between President Lee and Park has become meaningless. “Timing, agenda and momentum are the key for such a political summit, but the timing is off, as the party had completed the national convention and Lee finished his reshuffling. There is no momentum at this point,” he said.

Amid the fuss, Park remained silent about the cabinet reshuffling. “Some comments made about the planned Lee-Park meeting have nothing to do with what Park thinks,” said Rep. Lee Jung-hyun, spokesperson of Park.

Blue House officials have tried to calm the pro-Park lawmakers’ complaints. “It is Lee’s hope that the GNP’s competitiveness will be heightened before the next presidential election,” said a senior presidential official. “But, Lee has no intention of ruling out Park. The president has provided opportunities to Prime Minister-designate Kim and Chief of Staff Yim, as well as Lee Jae-oh, but they have to thrive [on their own].”