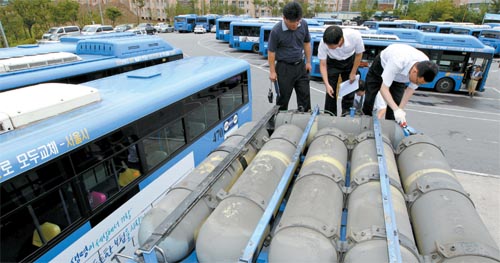 
After the explosion of a compressed natural-gas bus on Monday, many regional governments and other agencies are taking drastic actions to prevent another disaster.

The Seoul Metropolitan Government has prohibited about 100 CNG buses that were produced in 2001 from operating until they pass safety checks.

Public transportation woes are expected in Seoul during the next few weeks because of the 100 buses that will temporarily be out of service. Service will also be hampered because some drivers are refusing to drive buses that haven’t undergone inspection.

The Seoul city government will dispatch two experts to each of the 66 bus companies in Seoul to carry out safety examinations. If bus companies do not cooperate with the safety checks, they will face restrictions, such as a limit on how many buses they can operate.

Despite these actions, criticism has mounted over the belief that these measures are coming too late.

Reports have revealed that the government was aware that some buses had defects but didn’t take swift action to correct the problem.

The Ministry of Knowledge Economy yesterday said that the ministry, along with the Korea Transportation Safety Authority and Korea Gas Safety Corporation, examined 4,300 CNG buses from across the nation over the three months between December 2009 and February 2010 and found defects in gas tanks in 201 buses (4.7 percent). Among those with gas-tank defects, 66.7 percent of them were considered serious enough to cause an explosion.

“At the time, the ministry had bus drivers and companies immediately repair the leaking gas tanks,” said an anonymous source of the ministry. “The ministry also drafted a law that makes it compulsory to check gas tanks of CNG buses every three years.”

However, even though almost 5 percent of the examined buses carried defective gas tanks, the ministry and other relevant departments didn’t extend safety checks to the rest of the nation’s fleet. There was also no follow-up done to make sure that the buses with defects were actually repaired.

The ministry held an urgent conference yesterday and decided that about 24,500 CNG buses will go through safety checks before Sept. 17.

The CNG buses that were produced in 2001, the year when the exploded bus was produced, will be the first ones to be examined.

The ministry will also consider making it compulsory to attach safety devices to gas tanks, such as leakage sensors and protective covers.