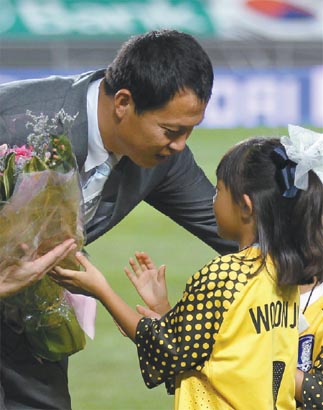 Lee Woon-jae receives flowers from his daughter. By Kim Min-gyu

SUWON - Korea won its friendly match against Nigeria 2-1 on Wednesday night, the first victory for the new manager of the national football team.

The game marked Cho Kwang-rae’s first international match since he took the helm of the national squad in June and was the second time the two countries met this summer.

The teams battled to a 2-2 tie in their South Africa World Cup group round, with Korea advancing to the Round of 16 while Nigeria returned home, finishing in last place in the group.

Cho placed Park Chu-young of AS Monaco at the top, while wingers Park Ji-sung of Manchester United and Cho Young-cheol also started the game, which was held at Suwon World Cup Stadium.

Four midfielders - including the Celtic’s Ki Sung-yueng - and three defenders who played in the Korea-Nigeria match in the World Cup were also in the national team’s starting lineup.

Korea took the lead in the 17th minute with Yoon Bitgaram’s goal. Yoon made his impressive international debut with a right-foot shot.

But Park Ji-sung helped set up the second goal for Korea, providing an accurate pass in the 44th minute to Choi Hyo-jin, who needed to only lightly direct the ball toward the net to get his first goal in an international game.

Meanwhile, Korea’s veteran goalie Lee Woon-jae, who started the game and remained in for about 29 minutes, played his last international game to wrap up his 17-year career with the national team.

He announced his retirement last week to make way for younger players.