Yang flies under the radar at Whistling Straits

Yang flies under the radar at Whistling Straits 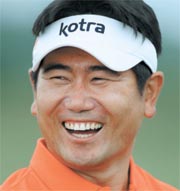 SHEBOYGAN, Wisconsin - Yang Yong-eun’s shocking upset win over Tiger Woods in the 2009 PGA Championship made him the first Asian to win a major title and elevated the golfer to rock-star status in his native Korea.

Case in point: the reception he received when he returned to his hometown on Jeju Island, where he needed a half dozen body guards to protect him from the mobs of fans waiting the see him.

“At one point I was walking up front and the bodyguards couldn’t catch up. I looked back and I was trying to figure out what was going on,” Yang said. “It turns out all their jackets and suits were all ripped up because there were so many fans that all wanted to get my autograph.

“No one was hurt, but it was kind of funny to see those big bodyguards and their clothes getting ripped like that.”

Yang may be a national hero in Korea, but he’s not getting that type of treatment at this week’s PGA Championship at Whistling Straits.

Although he is the defending champion, just a handful of reporters showed up for Yang’s pre-tournament news conference on Wednesday.

“It has been a year since my PGA win and maybe I’m kind of out of the spotlight a little bit,” Yang said. “And for the past year I haven’t been doing that great and maybe people think that I may not win this one again.

“So in that respect maybe that’s why I am flying under the radar.”

Yang is hoping that a return to the PGA Championship will be a remedy for a run of lackluster performances in 2010.

So far this year, Yang has made 13 of 17 cuts but only finished in the top 10 twice. His best result was a third at the Phoenix Open in February. He finished tied for eighth at the Masters, tied for 60th at the British Open and missed the cut at the U.S. Open.

“Last year I wanted to win and I was confident about my ability to play. Compare that to this year and I feel I have lost my rhythm a little bit and my confidence may not be as high as it was last year,” he said.

There are 11 former winners, including Yang, competing in the PGA Championship.

But if history is any indication, winning a second is no easy task unless your name is Tiger Woods or Vijay Singh.

Woods has won the tournament four times and Singh twice.

“I am playing with two legendary golfers,” Yang said. “The next two days will be ones I will remember for the rest of my life. I hope to go out there and have fun and enjoy the experience.”